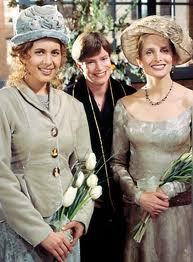 Ross' ex-wife Carol (pictured, far right) and her lesbian partner Susan were married on the January 18, 1996 episode of NBC's hit sitcom Friends.  And because Carol's parents refused to attend the wedding, Ross walked her down the aisle.  The ceremony was performed by Candace Gringrich (pictured, center), Newt's lesbian half-sister who rose to the periphery of celebritydom after Newt became Speaker of the House.

Surprisingly, this episode's audience was no larger than usual for the popular show nor was there much of a fuss about the episode.  Eight months later President Clinton signed the Defense of Marriage Act (DOMA) into law.  And on January 18 of 2004 the lesbian drama The L Word debuted on Showtime.