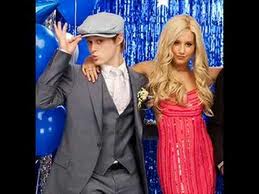 Three years before Glee there was High School Musical, a wildly popular TV musical that aired on the Disney Channel on the evening of Jan. 20, 2006.  Instead of a glee club struggling with an inferiority complex, HSM revolved around a somewhat pretentious Musical Theater class.  And although the subject was never broached it's all but certain that the student named Ryan (played by Lucas Grabeel, pictured with Ashley Tisdale) was gay since he had musical theater running through his veins.  This "don't ask, don't tell" approach held sway for the next two HSM movies as well.  Although a bit dim, Ryan was a good egg who had to put up with his diva twin sister Sharpay (pronounced like the breed of dog).

This being a candy coated Disney fantasy world filled with smiling and fresh-scrubbed faces, Ryan was never harassed.  In fact, every clique in school co-existed harmoniously.  In keeping with this dream world, the most sensitive boy in school was also the most popular, basketball star Troy Bolton, played by Zac Efron (and at 5'10", probably the shortest basketball superstar in history). 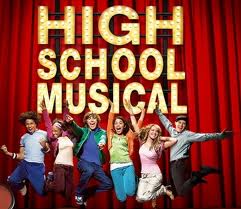 I didn't catch the movie when it first aired, but during the summer I rented it to see what the buzz was about - and I was captivated.  I especially liked the number Stick to the Status Quo, which charmingly depicted the turmoil created when kids like Troy don't follow their assigned social role.  Inspired by Troy's example, other kids reveal their secret passions, e.g. a jock interested in baking, the math whiz passionate for hip-hop.  Ryan, however, was not part of these "outings". 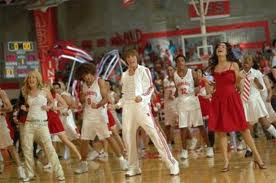 In the sequel we'd discover that Ryan once played baseball and taught the jocks a thing or two (oh, I bet he did - wink, wink).  The movie had lots of gay subtext ripe for exploitation (by Michael Lucas perhaps?).  Personally, I think Ryan was used as a distraction to divert attention from the bromance between Troy and his best bud Chad (pictured, left).  In fact, whenever they bickered their faces would get so close it seemed that a passionate kiss was imminent.  Sure, both had girlfriends, but ... 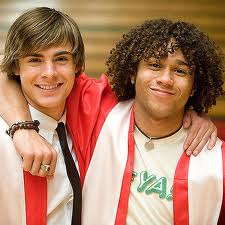 High School Musical was a smash hit as was its two sequels (the last one was a theatrical release).  Besides "tween" girls it also had much to offer gay viewers (of all ages), i.e. musical numbers, intricate choreography, a host of cute boys, a kinda hot basketball coach (played by Bart Johnson, pictured), a diva and, of course, Ryan.  HSM paved the way for Fox's introduction of Glee, a primetime series with musical numbers and a very out gay character.  However, I was never a fan of the show (although I've purchased some of its music on iTunes) - too much angst and gay Kurt gave me the willies (as did the female football coach).

Ryan's not gay. He asks Kelsi out to prom and sings to her in the 3rd movie. And he's dancing with a bunch of pink cat girls

Sorry, but thats not a very convincing argument. Im gay and I went to my prom.