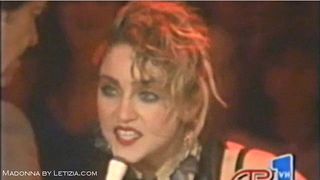 Believe it or not, there was a time when Madonna was unknown, but on Jan. 14, 1984 the 25-year-old fledgling megastar gained mainstream exposure when she appeared on American Bandstand.  She kissed Dick Clark's ring and lip-synched her song Holiday, which had entered Billboard's Top-40 a month earlier - her first single to do so.  Although it's now a classic, it wasn't one of her more successful singles as it peaked at only #16.  However, thirty-seven top-10 hits would follow (twelve of which went to #1).  When Clark asked Madonna what her plans were for the future her very prescient reply was "to rule the world".  To view this 5-minute clip, double click here. 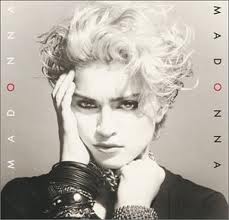 I bought my first Madonna single, Everybody, a year earlier in January 1983, one of her few not to crack the top-40. (I also remember hearing her being interviewed on the radio back then.)  And during the spring of 1984 I bought a 12-inch version of Burning Up, a song that wasn't released as a single but was popular in gay clubs.  For some reason I never got around to buying her first album.

Ha, I find this happens a lot with all of us pop culture tweeters! I used to get discouraged if I read a tweet I was going to send but then realized theres so little overlap. So tweet ahead!