Buoyed by the success of Queer as Folk (which debuted in December 2000), Showtime produced a one-hour drama about a group of lesbian friends and lovers called The L Word.  It premiered on Jan. 18, 2004. 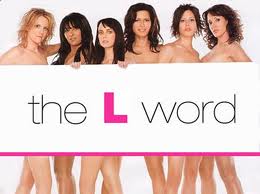 Except for their same-sex themes the two series were very different: 1) QAF took place in Rust Belt Pittsburgh while The L Word was set in sunny and trendy Los Angeles/West Hollywood; 2) The L Word had more "name" actresses: Jennifer Beals, Pam Grier, Marlee Matlin and Cybil Shepherd - QAF had one, Sharon Gless;  3) QAF had a lesbian couple (Lindsay and Melanie) but L Word incorporated very little about the lives of gay men into its storylines; and 4) The L Word ran for six seasons, one more than Queer as Folk.  However, QAF aired thirteen more episodes (83 vs. 70).

After the series concluded in March 2009 Showtime aired a reality series that came out in the summer of 2010 called The Real L Word.

I have never seen this show, but some friends rave about it. To the Netflix.com queue we go ladies.
I love Pam Grier in Jackie Brown.... She can do no wrong in my book!