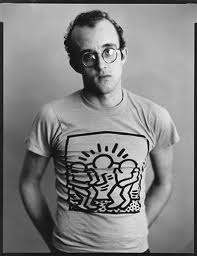 Few well-known personalities have died of AIDS at such a young age as graffiti/pop artist Keith Haring, who was 31 at the time of his death on February 16, 1990.  And with the exception of Jean-Michel Basquiat and Egon Schiele, who died in their late 20s, no other accomplished artist was younger at the time of his death as Haring.  But he accomplished a lot during his career in the 1980s and was known worldwide.  He left behind an estate worth $25 million.

I remember seeing Haring's curious "creature graffiti" on the walls of the Sheridan Square/Christopher St. subway station in 1981 when I moved into Manhattan.  His art was playful and otherworldly with a touch of foreboding. (Not only was he known for his art but for social activism as well.)  The style evoked that of the Incas and Mayans.  His work has appeared on T-shirts, exterior and interior walls, postcards, greeting cards and CD covers.  Many books have been published about his life and work including Keith Haring: Life for Art as well as a number of documentaries including Universe of Keith Haring. 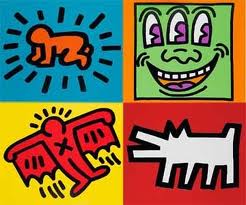 Three other noted pop artists died in the three years preceding Haring's death (pictured, from right to left): In 1987 Andy Warhol died at age 57 (complications after surgery); Jean-Michael Basquiat died in 1988 at 27 (heroin overdose) and photographer Robert Mapplethorpe died from AIDS complications at the age of 44 in 1989.