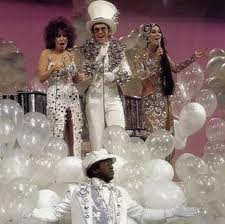 Now this is what a TV special is supposed to be like!  On February 12, 1975, a Wednesday night, CBS pulled off quite a coup when Cher hosted a gala telecast with Bette Midler and Elton John as her guests (comedian Flip Wilson too) - three fledgling superstars, all of them gay icons, together on network TV.  They were all about the same age - Midler was just 29, Cher 28 and Elton was one month from turning 28.  Cher, however, was clearly the veteran as she'd been in the public eye since she and Sonny married and had a #1 song with I Got You Babe ten years earlier. Among the performances, Cher sang Bennie & the Jets with Elton and did a "Trashy Ladies Medley" with the Divine Miss M.  But perhaps the highlight was their medley of Motown hits (e.g. Proud Mary, Ain't No Mountain High Enough) shown in the following clip:

This special was one of the highlights of my senior year in high school.  According to Nielsen the special got a 29.5 household rating/49 share and 40 million tuned in.  (Get Christie Love! was one of the shows that aired opposite it.)