AIDS Strikes Down Famed Graffiti Artist Keith Haring (February 16, 1990)
Same-Sex Marriage Gets Its Due on "The Simpsons" (February 20, 2005)

Of course, Downton Abbey has been embraced by viewers of all sexual orientations.  However, the witty repartee and subtle putdowns remind me of the gay social whirl of New York.  And the show's dining scenes, whether upstairs or downstairs, brought back vivid memories of meals during summer weekends at the Pines.  With that said, here are some of my favorite lines from Season 3 - and, no, they weren't all said by Maggie Smith's character!  (Since some are based on my memory, they may not be the exact word-by-word quote).

"Come war and peace, Downton still stands and the Crawley's are still in it!" - Exclaimed somewhat sarcastically by Cora's American mother (Shirley MacLaine) upon her arrival. 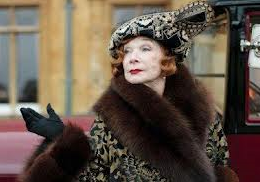 "Oh, you two are dressed for a barbecue." - Sarcastic remark made by Cora's mother to Robert and Matthew who, because of a wardrobe mix-up, arrived for a soiree in their morning suits rather than black tie.  Shortly thereafter, the dowager countess (Maggie Smith) asks a butler for a drink, only to realize it's Sir Robert.

"My beauty, my baby." - Lady Grantham saying goodbye to Sybil, perhaps one of the most beautifully sad moments of the entire season. 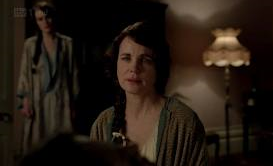 "Because if we'd listened to him Sybil might still be alive, but your father and Sir Phillip knew better and now she's dead." - Lady Grantham explaining to the family, with barely concealed contempt, why she needs to write an apology to the family doctor who was very concerned about Sybil's condition but his concern went unheeded.

"You'll make me untidy" - Mary's demur response to Matthew after she had just finished dressing for dinner and a weary Matthew asked her to join him on the bed.

"Have you changed your pills?" - Matthew's mother to the dowager countess after she surprises her during dinner with an uncharacteristically progressive comment about a woman's role.

"It seems a pity to miss such a lovely pudding". - The dowager's response to Robert's disrupting the ladies of Downton attending a luncheon at cousin Isobel's home.  He demanded, unsuccessfully, they leave because they were being served by Ethel, who had fallen into prostitution after leaving Downton and bearing a bastard son. 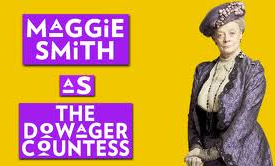 "You have surrounded this house with a miasma of scandal." - The dowager to Matthew's mother Isobel after she employs former Downton maid Ethel who turned to prostitution after being fired and having a child. Also, Mr. Carson's enunciation of the word "prostitute" was priceless because it was said with such contempt.

"Mr. Carson, I am not foul." - After being berated by Carson, who used the word "foul" to describe Thomas' homosexuality, Thomas turns and says this as he's about to leave the room. 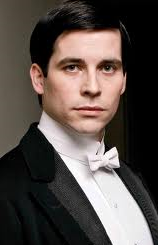 "Oh, I didn't realize you were a fan of Mr. Oscar Wilde" - O'Brien to Bates upon discovering why she was invited to the new home of Bates and Anna (so he could talk to her about the Thomas-Jimmy situation).

"Her ladyship's soap."- Bates whispered this to O'Brien in hopes of persuading her to stop Jimmy's intention to go to the police if Carson gives Thomas a decent reference. 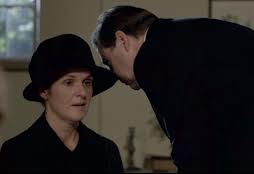 "Criminy, if I screamed blue murder every time a chap at Eton tried to kiss me I'd have been hoarse in a month ..." - Lord Robert to Bates after Bates tells him what happened between Thomas and Jimmy, and how Jimmy and Alfred reacted.

"When you're like me, you have to read the signs best you can, because no one dare to speak out." - Thomas trying to explain to Carson why he thought Jimmy might reciprocate his interest. 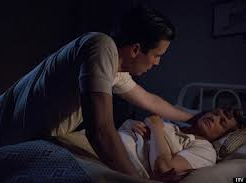 "So they say" - Edith's rather dismissive response to her editor's comment about how London society gushed over how lovely Lady Mary looked at her wedding.

"That's what Sybil would want" - Lady Grantham, Mary and Tom often said this to Robert anytime he was resistant to something they want to do.

I'd love to hear your favorite lines as well.

"Oh, back in the knife drawer, Miss Sharp" from Miss O'Brien to Anna before Bates set her all atwitter with the old 'ladyship's soap' threat.

Ha, ha, thanks for the contribution Maury! I thought of including it but I thought it would be a sort of plagiarism since you were the one that brought it up at dinner yesterday.

Rob, good quotes. Also, the one at baby Sybil's christening where Robert, Lady Violet, and the priest are photographed and Cora says something like the following to Robert......"Oh Robert, don't look as if you're being converted!"

Rob, you didn't include the gayest line of this or any other season! Bates says to Jimmy/James apropos his kiss from Thomas, "I can't believe you're acting like a big girl's blouse. You're still in one piece." I thought this was even better than Lord Grantham's line that if he had screamed blue murder every time some boy tried to kiss him at Eton he would have been hoarse in a month. Surprisingly sophisticated viewpoints from above stairs and below stairs for this period.

Poor Matthew! Snuffed out in his moment of supreme happiness. And he was bonding so well with Tom, now elevated to estate manager. It could have been the beginning of a beautiful friendship as Mr. Bogart said.

Thanks Stephen. I remember when Bates said it that it was a putdown, but I couldn't hear it clearly. And I amended the post's Eton quote by Sir Robert to add the end of the quote which you provided.