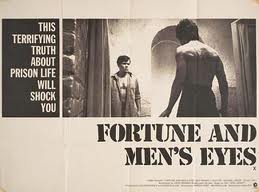 The off-Broadway play Fortune and Men's Eyes opened at Actor's Playhouse in the West Village the evening of February 23, 1967.  (The play's name was taken from the first line of Shakespeare's 29th Sonnet).  It offered up a chilling portrayal of prison life, touching upon subjects such as male-on-male rape and sexual slavery and was very risque for its time.  It opened a year before Boys in the Band and more than two years before the Stonewall riots (and 30 years before HBO's Oz).

The play ran for nearly a year and then was released as a movie in 1971.  (Although Fortune's stage version opened a year before Boys in the Band, the movie version came out a year after Band's theatrical release - pictured, left).  As a teenager I remember seeing small ads for the movie in the Pittsburgh paper, and although I didn't quite know the movie's premise I was very intrigued by the title and the ad's suggestive photo. 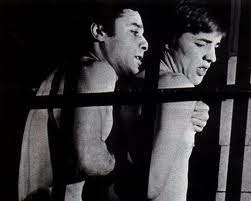 When the play opened in Los Angeles a few years later it starred Sal Mineo (who was trying to change his image) and co-starred 23-year old Don "Miami Vice" Johnson (pictured).

There's a guy named Darren Home who says he played the lead role in "Fortune and Men's Eyes" in 1987 in San Diego and then the company went to NY for an Off-Broadway performance. I can't find any evidence of this. Is he bluffing? Got any ideas?

If youvedone a Google or Bingsearch and itdidnt turn up anything Id say hes bluffing. Of course, you can always ask him for proof.

Darren Home didn't do anything of the sort. Nor did he serve in the army. He didn't make it past basic training. He didn't graduate from San Diego State. In fact, he took only a couple of classes before dropping out. He was living in Campbell during the time he says he was a star in New York. I know this because I was involved with him during that time period. He tends to fabricate experience.

I know the Darren Home story. He lived in San Diego at the time and worked with someone who had a play from San Diego go off Broadway but it wasn't this one. However, the same man who produced that show also was involved with this one and a local actress also made the trek out to New York that worked with them as well. Darren did not go. He knew enough about what was happening with the two co-workers and did have some involvement in the theater community in San Diego but he just attached his name to it to more than likely try and impress this Theresa lady. He's never acted in anything more impressive than a local vaudeville dinner theater in the Bay Area that he was only in because his wife owned it.