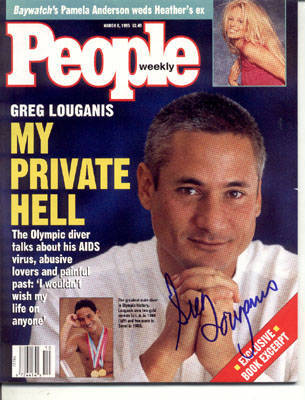 On February 22, 1995 35-year old Olympic diving legend Greg Louganis called a press conference and disclosed that, not only was he gay (long rumored), but also HIV+ (which he was aware of since 1988).

These revelations were in preparation for publication of his autobiography Breaking the Surface.  Two days after the press conference he was interviewed by Barbara Walters on 20/20 (see video clip below).  The following week he spoke at a meeting of NYC's gay professional group, New York Advertising & Communications Network (now called Out Professionals), at Cooper Union before an audience of 500.

Two years later a TV movie about Louganis' life, with the same title as his autobiography, aired on USA Network.  It starred 23-year old Mario Lopez.

Louganis' disclosure came 2-1/2 years after NBA great Magic Johnson revealed that he was HIV+.  And in 2000 openly gay figure skater Rudy Galindo (1996 U.S. Men's National figure skating champion) also announced his HIV status.  A very important lesson conveyed by Johnson, Louganis and Galindo, all still alive, was that life can go on despite an HIV diagnosis, i.e. HIV does not equal death.  For many it's a chronic condition that can be managed with anti-viral drugs, not a death sentence.