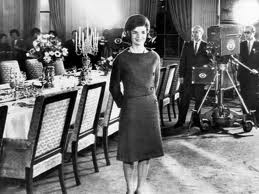 On Valentine's Day 1962, 32-year-old First Lady Jackie Kennedy gave a televised tour of the White House.  It aired on CBS and NBC (and on ABC a number of days later).  In addition to discussing the renovations and redecorating she was overseeing, the program also served as a lesson in U.S. history as Jackie told anecdotes about a number of the presidents.  This broadcast marked the first time a First Lady had been given TV airtime.  Not surprisingly, the special was very popular and drew an audience of 56 million (back when the US had 140 million fewer people than it does today). 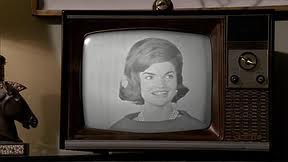 My first exposure to the special was in college in 1976 when it was shown on Friday "movie night".  I was so surprised by Jackie's soft voice, peculiar accent and her almost childlike demeanor.  However, there was charm in her youth and the simplicity of her presentation.  And her outfit resembled something First Lady Michelle Obama might wear today (especially the flats).

This special was incorporated into the storyline of an episode of Mad Men during its second season (in 2008).  It amused me because it showed the show's various female characters entranced by the broadcast - as well as closeted gay character Sal (played by out actor Bryan Batt) who seemed more excited about watching it than his girlfriend!