Same-Sex Marriage Gets Its Due on "The Simpsons" (February 20, 2005)
Sexy Men, Soaking Wet

Nancy Sinatra Tops the Charts with "These Boots Are Made for Walking" (February 20, 1966) 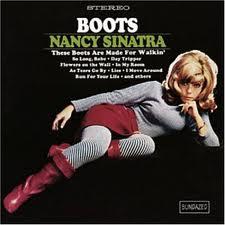 Frank Sinatra's daughter Nancy had one of the biggest hits of 1966 with Boots, an early song about female empowerment.  (Two years earlier Lesley Gore had come out with a similarly-themed song, You Don't Own Me.)  It went to #1 the week of February 20.  However, it wasn't until twenty years later that the song became part of the "Camp Hall of Fame" when cable network VH-1 uncovered a primitive video for the song that had been produced for video jukeboxes.

I was 8 years old at the time the song was popular and remember thinking that the song was pretty dreadful.  Now I've grown to like it, thanks largely to the video with Nancy and her bevy of young vixens with their teased That Girl flips and go-go boots.  And who can forget the call to action at the song's end - "Are you ready boots? ... start walkin!".

A year later Nancy and her dad had an even bigger hit with the song Something Stupid, which topped the Billboard Hot 100 for four weeks.  It was very popular despite the creepiness factor of father and daughter singing about romantic love.

And let's not forget Nancy's contribution to the Bond treasury of title songs with "You Only Live Twice." One of my favorites!

Yes, that is a beautiful song. And "Sugartown" is a nice piece of fluff.