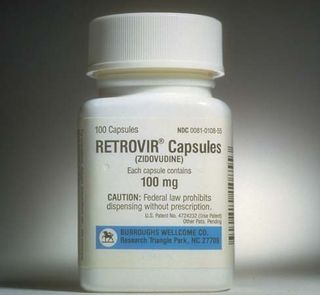 Six years after AIDS began ravaging the gay population a glimmer of hope arrived on March 20, 1987 when the FDA approved the use of AZT (marketed as Retrovir).  However, despite its promise, it proved toxic for quite a few because it was very potent and patients were instructed to take it every four hours.  Since many who had AIDS back then already had severely compromised immunne systems, the prescribed dosage was often difficult for their bodies to handle.  Side effects could be quite unpleasant and debilitating.

In these early years of the plague, those infected with the AIDS virus were more or less voluntary guinea pigs when it came to experimental treatments.  However, they willingly, and stoically, participated because they were desperate for any treatment that might enable them to live longer.  For example, an ex-lover of mine at one point was receiving injections of pulverized shark bone.

Because of stories circulating about AZT's toxicity, it wasn't uncommon for HIV+ patients to be reluctant to take it.  Even after its strength was lessened and the prescribed frequency was reduced drastically, it took convincing from doctors to dispel the old stories.  Now that there was something on the market, the number of gay men getting tested for HIV began increasing.  And a few years later AZT's effectiveness was enhanced when it began to be prescribed in combination with other anti-viral drugs that came on the market. 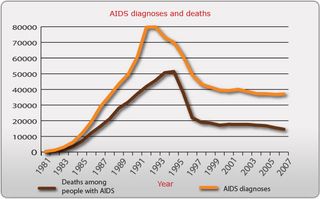 Another treatment breakthrough would occur in the early 1990's when a new generation of drugs - known as protease inhibitors - were introduced.  They helped transform HIV into more of a chronic condition for many.  As a result, AIDS deaths began declining significantly in the mid-1990's.