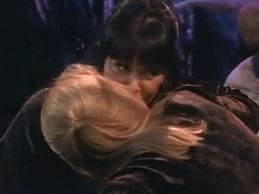 In November 1992, during ABC sitcom Roseanne's fifth season, Sandra Bernhard's character Nancy was introduced as the first regularly occurring lesbian character in a TV show.  Sixteen months later on March 1, 1994 (at the end of Nielsen's February ratings "sweeps") Nancy's girlfriend Sharon, played by Mariel Hemingway, kissed Roseanne at a lesbian bar.  Roseanne went to Lanford's bar "Lips" to prove how "cool" she was; however, she became unnerved by this five-second kiss and realized that perhaps she wasn't as "hip" as she thought.  (Hemingway had also portrayed a lesbian in the 1982 movie Personal Best.)