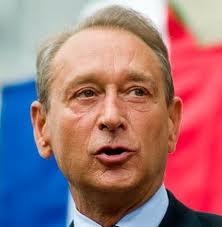 Back in 2001, in the space of just three months, two openly gay candidates were elected mayors of "world class" European cities.  First, 50-year-old Bertrand Delanoe (pictured, near right) was elected mayor of Paris on March 18.  This made Paris (with a population of 2.1 million) the largest city in the world with a gay mayor.  Then in June voters in Berlin (population 3.4 million) took that distinction away from Paris when it also elected a gay mayor, 47-year-old Klaus Wowereit .  (Coincidentally, the German city of Hamburg also elected a gay mayor that very same year.)  Delanoe remained mayor through the spring of 2014 when he was replaced by his deputy mayor, Anne Hidalgo, who became the first woman to hold the office in Paris.

18 months after his election Delanoe was stabbed in the stomach as he walked through a street festival by a Muslim immigrant with homophobic views.  After surgery he remained in the hospital nearly two weeks.  (This happened a week before I arrived in Paris for my first visit.) 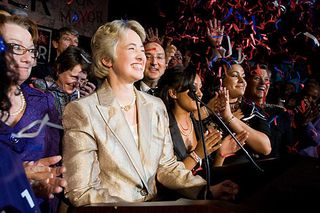 And then in 2009 Houston became the first U.S. city with 1 million+ residents to elect a gay mayor, lesbian Anisse Parker.  Before that, the largest U.S. cities with gay mayors had been Portland, Oregon and Providence, Rhode Island.