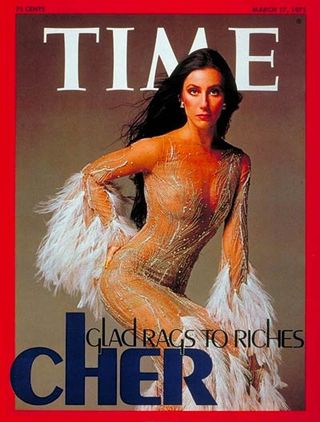 Now a single woman, and starring in her own variety show, 29-year-old Cher was in the midst of Version 3 of her career.  (V1 was as a singing duo with Sonny in the mid-1960's; V2 began in 1971 with their CBS variety show).  Her "emancipation" warranted a TIME Magazine cover story* and this glamorous cover from the mid-March 1975 became an instant classic.  (And since then Cher's career has continued its iterations, including Hollywood Cher; Disco Diva Cher; Infomercial Cher; and Retirement Tour Cher.)

Four months after Cher's TIME cover Elton John would get one of his own as well.  Other gay icons bestowed with covers have included Liza Minnelli (1972)*, Linda Ronstadt (1977), Madonna (1985) and Bette Midler (1987).  But none compare to Cher's in terms of "Wow!" factor (But Rondstadt's sultry cover comes close).

*Surprisingly, while Liza merited a cover story her even more iconic mother never had one.