Judy Garland at Carnegie Hall: A Performance for the Ages (April 23, 1961)
Discreet Encounters ... a Thing of the Past? 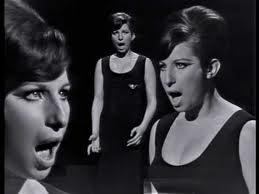 Springtime was an important time for Barbra Streisand's early career as her first TV appearance (Jack Paar, 1961); two Broadway shows; two TV specials; and her Oscar for Best Actress (Funny Girl) all occurred in March or April.  The first of her TV specials aired on April 28, 1965.  Titled "My Name is Barbra", it coincided with the release of her album by the same name.

The special was shot in black & white and featured no guests, just Barbra.  Amazingly, the hour-long telecast was jam-packed with 27 songs (actually, less than an hour when taking commericals into account).  The special was critically acclaimed, won three Emmy Awards, and was followed in 1966 by her next special "Color Me Barbra" , which would be another tour de force.