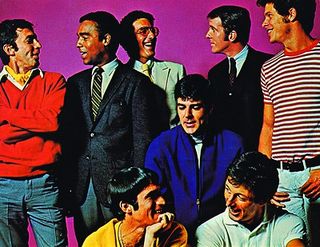 Just three months after opening off-Broadway, Mart Crowley's The Boys in the Band came to Broadway, opening on Easter Sunday.  It offered an unvarnished glimpse of eight homosexuals at a birthday party and was the first play to openly portray the lives of gay men.  It ran for three years and was made into a movie in 1970.  I first saw the movie in January 1981 when it was showing at the Eighth St. Playhouse in the Village.  I found it depressing and dripping in cloying stereotypes.  However, I did enjoy the opening credits in which Cole Porter's Anything Goes was playing.

The 2011 documentary Making the Boys tells the story behind the creation of the play.  It may also be of interest to fans of Natalie Wood, who is mentioned repeatedly since she was a dear friend of Crowley's (who is now 78, pictured far left).  It was directed by Crayton Robey (near left), who also directed the documentary When Ocean Meets Sky, which tells the story of Fire Island Pines.

Unfortunately, like most documentaries that delve into gay history, Making the Boys played in just a few theaters nationwide.  In New York it played at Quad Cinema last year for only two weeks.  (Luckily, I saw it the last night it was there).  It's a sad commentary on the lack of interest in our history.  However, it did play at the Tribeca Film Festival and at a number of gay film festivals.  Perhaps it will get picked up by LOGO (like When Ocean Meets Sky).

An excellent discussion about the play and movie can be found at CinemaQueer.com .