Discreet Encounters ... a Thing of the Past? 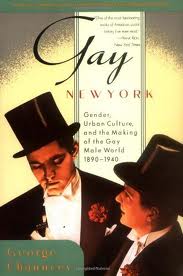 About ten years ago I read the book Gay New York (by George Chauncey) and remember a chapter that discussed how straight guys back in the day (i.e., before 1940) could enjoy getting a blow job without stressing whether it meant they were gay.  After all, it was the fellow giving head who was the "queer" one.  Furthermore, there was little chance these dalliances would be exposed since the homosexual had more to fear from being exposed.  That's not necessarily the case nowadays. 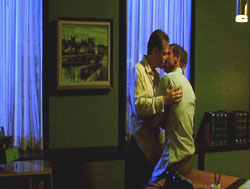 Since many gay men no longer live a secret life wrapped in shame, they don't have issues about discussing their exploits or revealing their partners.  (Exhibit A: Mike Jones, the masseur/escort who exposed evangelist Ted Haggard in 2006.)  And cellphone cameras can make any seemingly anonymous encounter glaringly public.  As a result, discreet encounters may become a thing of the past. (The photo to the left is from the 2002 movie Far From Heaven, about a closeted husband in the 1950's, played by Dennis Quaid, and the turmoil he causes for his storybook-perfect family.)

However, despite these changes, the animal urge for sex will often trump the fear of being caught/revealed.  Of course, with the growing acceptance of gays, the need for men to live in the closet will, hopefully, continue to decline.  This will diminish the need for men to live life "on the DL" and bring to an end the heartache suffered by unsuspecting girlfriends and wives.