The first same-sex marriages in the US took place in Massachusetts on May 17, 2004.  This was six months after the state's Supreme Court ruled that a ban on such unions was unconstitutional.  Since then, thirty-six other states and Washington, DC have also made gay marriage legal.  (The Netherlands was the first country to legalize gay unions in 2001.)  Many of these states came on board after the Supreme Court struck down the 1996's Defense of Marriage Act (DOMA) in June 2013.  Its ruling made federal marriage benefits available to married same-sex couples throughout the nation - even if couples lived in states that didn't allow gay marriage.

For three months in 2008, the state of California also allowed same-sex marriages, until voters narrowly voted against them later that year.  However, any marriages that were performed in those months are still valid.  In August 2010 a Federal District Court in San Francisco overturned Proposition 8 but resumption of marriages was put on hold until the US Supreme Court overturned Prop 8 in June 2013 (when it also overturned DOMA). 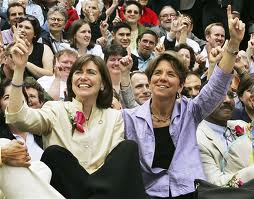