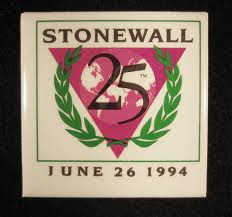 For the most part the gayest event to occur in New York City was the Tony Awards.  But in 1994 NYC was chosen to host the fourth Gay Games.  (San Francisco played host to the first two Gay Games in 1982 and 1986; Vancouver hosted in 1990).  It was also a fitting way to help celebrate the 25th anniversary of the Stonewall riot, which embroiled Greenwich Village in late June of 1969.  Opening ceremonies were held on June 18 at Columbia University Stadium; Yankee Stadium was the site of the closing ceremonies.  At first, Yankees management was unwilling to make the stadium available, but mayor Rudy Giuliani appealed to Yankees owner George Steinbrenner's civic spirit. 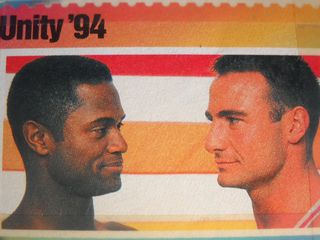 More than 10,000 athletes from 44 countries participated in 31 events, including HIV+ athletes who were allowed entry into the US after the Clinton administration waived visa restrictions (but they were limited to a 10-day visit).  Sporting events included traditional ones such as weight lifting, swimming and track & field, as well as more off-beat competitions such as badminton, in-line skating and aerobics.  Billie Jean King and Greg Louganis spoke at the opening ceremonies and Sir Ian McKellen presided over the closing ceremonies.  Louganis also gave a diving exhibition.

At the same time as the Gay Games, the United States was playing host to soccer's World Cup for the first time; the first three matches were played in the New York area at Meadowlands Stadium in New Jersey.  It was estimated that these two events plus Gay Pride festivities drew 1.2 million visitors.

Any idea how I could get the song that was sung by Lillias White I think the name was Pass the torch or the flame......Unity Games 1994