Two months after Ellen DeGeneres made headlines by personally coming out and then having her character come out on her ABC sitcom as well, Rupert Everett played gay in the movie My Best Friend's Wedding.  He was besties with Julia Roberts' character, a bereft single woman driven to sabotage the wedding of the man she loves - her best friend in college, played by hunky Dermot Mulroney.  Everett agreed to play along as Robert's fiance as a way to make Mulroney's character jealous.  Awkward moments and madcap comedy ensued  Everett's role was somewhat of a watershed because he was a gay actor playing a gay role.

Dermot Mulroney, the man who breaks Julia Roberts' heart, should not go ignored since I think he was at the peak of his sex appeal when the movie came out (he was 33 at the time).  Perhaps if the movie had been released 15 years later he and Everett's character could have been the ones getting married. 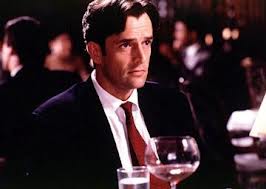 The movie was a hit, grossing $300 million worldwide and Everett got raves for his supporting performance.  There was a talk of him getting an Oscar nomination but, alas, he was passed over; however, he was nominated for a Golden Globe Award (he lost to Burt Reynolds who was in Boogie Nights).  The snub left him somewhat bitter and he alluded to the fact that he wasn't nominated because was openly gay and that made Hollywood nervous.  The following year he had a role in Shakespeare in Love which was another box office smash, grossing nearly as much as Wedding.