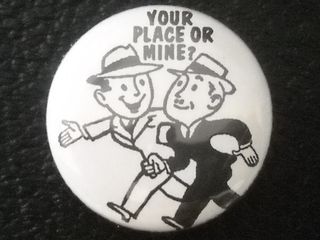 Bric-a-brac, ephemera, mementos - whatever you choose to call them, collecting "stuff" can be rewarding, especially when you look through it years later and experience moments of your life all over again.  (As the disco classic, Souvenirs, by Voyage says: "Souvenirs are signs that take you away".)  I've already written posts about my postcard collection.  Now I'll share items from my collection of pins, fridge magnets, match books and business cards, all with a gay pedigree, circa 1980-2000.

Looking at the first group, the "Go Homos" button was made to look like the style of GQ Magazine's logo, in response to perceived homophobia by the magazine's publisher.  In the second group, the pin on the left was handed out by the Pink Panthers, who were fashioned after the Guardian Angels to patrol against anti-gay violence in the Village in the early 1990's.  MGM took them to court and won for copyright infringement over the group's appropriation of the Pink Panther paw. 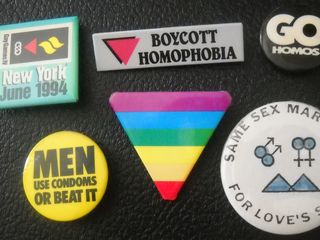 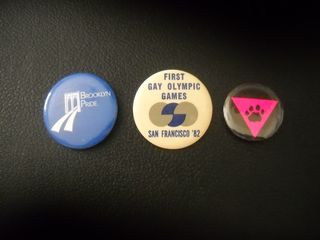 In the third group, the "Clit Power" pin is the sole lesbian-oriented pin I own.  The simple "Fire Island 1981" pin was picked up during my first visit to Cherry Grove.  After spending years adorning bulletin boards in my various offices, the pin's purplish-blue hue has faded considerably.  Finally, the fourth group shows pins of a more serious nature.  The "DC in '93" pin refers to the huge political rally (between 800,000 and 1 million participated) that took place in the nation's capital on April 25, 1993, a time when hopes were high because of breakthroughs in AIDS treatments and the recent election of Bill Clinton. 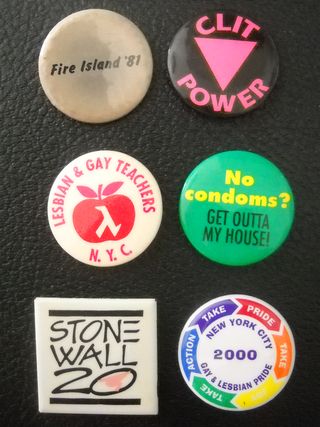 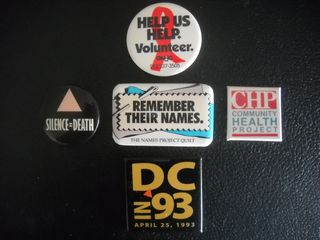 These are all fairly self-explanatory.  And, yes, they all can be found on my refrigerator ... 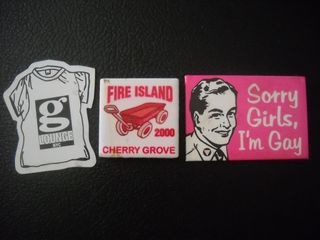 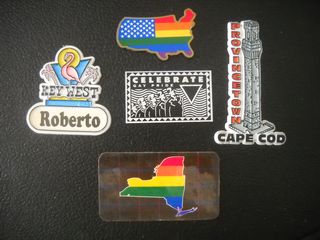 The first on the left came from St. Mark's Baths; the second from a short-lived bar on 8th Avenue named Chelsea Transfer, which had a beautiful, curved wooden bar; The Saint, of course, was the premiere gay dance club in the 1980s; 'A' stands for the gloriously raunchy Anvil bar on West Street; and the last matchbook is from Uncle Charlie's, NYC's most popular bar from the late 70's through early '90s, until it was supplanted by Splash.  In the second group are matchbooks from Boy Bar in the East Village (1990s); Tracks, which was in Chelsea in the late 1980s; the Club Baths on 1st Avenue near Houston St. (next door to a funeral parlor); and Ice Palace disco on West 57th St., which had its heyday in the late 70s thru early '80s. 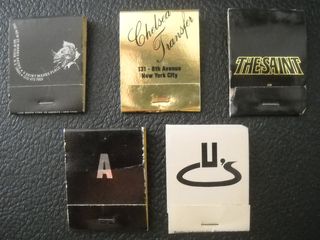 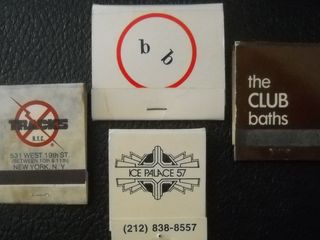 In the 1980s and 1990s, Claire was in the space now occupied by Elmo on 7th Ave. in Chelsea.  In the late 1980s, Stefano's was in the gay Hillcrest neighborhood of San Diego.  Partners was a gay bar in New Haven.  In the early '80s, before my boyfriend at the time moved to NYC, he lived in Connecticut, and occasionally after he picked me up at the train station in New Haven we'd stop in.  I remember it having a fog machine that sprayed a mist made of talcum powder.  Plain & Fancy was one of many restaurants on Commercial St. in Provincetown.  La Fabula (or, La "Faaaabula!") was a popular restaurant in West Hollywood (at least in the late 80s thru early '90s).  And La Te Da was an upscale restaurant in Key West's predominantly gay neighborhood. 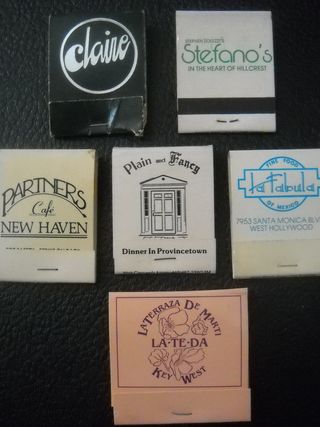 These were handed out during happy hours that provided a free drink after the purchase of the first.  Nowadays, most bars just reduce drink prices during happy hour.  An exception is Splash, which still has a two-for-one offer, but bartenders now hand you a paper receipt rather than a decorative chip. 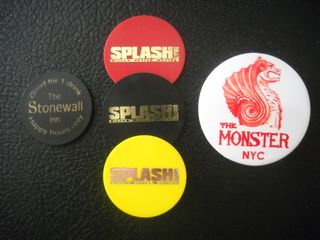 The first card is from Summer Solstice, the gift shop found in the harbor of Fire Island Pines, which sits atop the Pantry grocery store.  The middle card is from Sip'n Twirl, the bar that's situated in the complex behind the Pavilion.  The last card is a calling card to write your name/number if you met someone at low tea you might want to see later - this was before texting. The card in the center is from Club Norreh, a multi-level bar/club in Pittsburgh, which was the first gay bar I ever set foot in - back in the summer of 1978.  Next is Che 2020, which was briefly what the mega-popular Food Bar restaurant was renamed in the early '90s . Manatus and Village Den are two West Village institutions - and still in business. 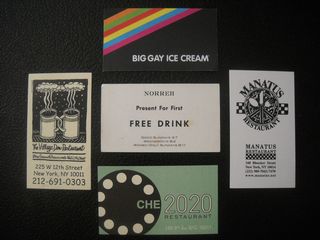 This selection comes from the department store Fast Buck Freddie's on Duval St. in Key West; guest houses in Provincetown and Ogunquit, Maine; my membership card to the gay running group Front Runners; and the last is from Men in Suits, a monthly gathering of men who got into (and sometimes out of) suits and socks with garters. 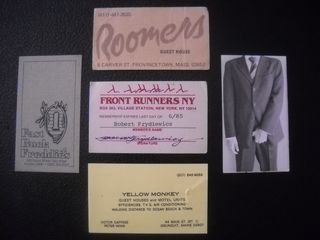 And one more for good measure ... 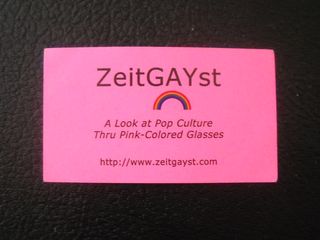