Recap of the 2013 Tony Awards - One More Gay Man's Opinion

In the afterglow of last night's 2013 Tony Awards, here's another gay man's opinion, limited to 10 observations ...

1. Neil Patrick Harris' opening number was spectacular, but then I thought he went flat.  Perhaps the Billy Crystal syndrome?  His mash-up of titles of musicals and plays is tired; one joke at Mike Tyson's expense was enough; and his tux was unflattering and looked like it was made from itchy flannel. 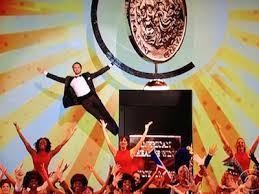 3.  As he closed his acceptance speech after winning for Matilda, Gabriel Eberts thanked "Mom, Dad and Scott", leaving many viewers to wonder whether Scott was his partner, dog, agent, or brother. 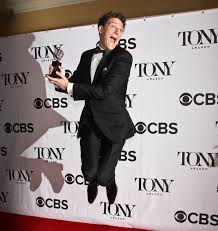 4. Kinky Boots choreographer, Jerry Mitchell, gets my vote for sexiest man in attendance.  And although he looked great in his red tux jacket, the oversized bow tie was an unfortunate choice. 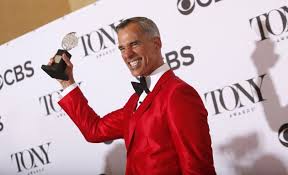 5. Cyndi Lauper, Billy Porter, Cicely Tyson and Patina Miller all gave wonderfully heartfelt acceptance speeches.  Tyson's slow and deliberate delivery of her acceptance was in refreshing contrast to the rat-a-tat-tat style of most of the other winners (see Judith Light, below).  And Miller's gown was gorgeous, the most beautiful of the night. 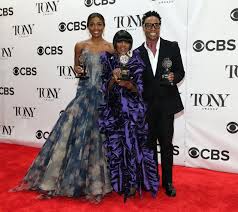 6. I love Judith Light and was delighted that she won another Tony, but her overwrought acceptance was a repeat of last year's.  OK Judith, you won the Tony, you can stop acting! 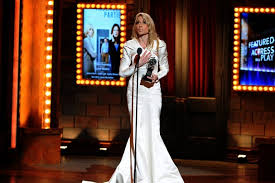 7. I thoroughly enjoyed the musical numbers from Matilda (it reminded me of the number from Spring Awakening a few years ago) and A Christmas Story, but wasn't blown away by the Kinky Boots number, which just seemed like generic Broadway. 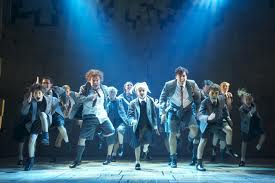 8. The actor who portrays Simba in The Lion King appeared on stage twice.  And although he had a dazzling smile, his pecs were a bit too man-boobish for my taste.  (Or perhaps it was the make-up on his upper chest area that accentuated them.) 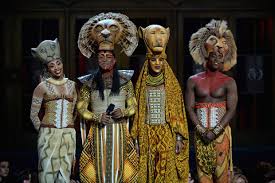 9. Instead of Cherry Jones or Cynthia Nixon, this year's token lesbian was Jane Lynch. 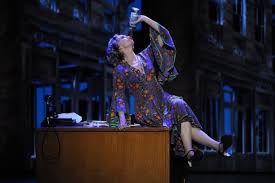 10. Finally, whose idea was it to pair somewhat diminutive Mayor Michael Bloomberg with Amazonian Sigourney Weaver?  (I suppose it could have been worse - he could have been accompanied by her and the equally towering Jane Lynch.)  Also, despite his glowing report about Broadway attendance, just a few days ago there was an article in the Times reporting on declines in attendance and box office revenue.

And if you still can't get enough of the Tonys, here are links to recaps from the previous two telecasts:

1. The opening number was amazing. I agree that Mike Tyson was mentioned too often, and when being mentioned the pans to him in the audience showed him to be clueless. I also agree that the mash-up was tired.
2. Why does gay have to be mentioned? I'm not offended that hetero wasn't mentioned. This is about performances on-stage, not in the bedroom. Also, it may be the network or Broadway League trying to attract the average viewer; sort of don't tell, don't tell (intentionally misquoted). You, as an adman, should understand that.
5. Miller's gown was gorgeous and she wore it well, as was Tyson's (Cicely's, not Mike's ;p). C. Tyson's elegantly-paced speech was that of a pro, even incorporating the "wrap-it-up," rather than becoming flustered.
6. I agree with your assessment of Judith Light's speech. However, as a Pittsburgh boy I must point-out that she, as well as Patina Miller and Pittsburgh's own Billy Porter, attended Carnegie Mellon in that fine city.
7. Having seen and greatly enjoyed Kinky Boots live on Broadway, I too was disappointed in its choice of selection. Perhaps, again, the network or Broadway league didn't want to alienate some viewers with a number such as "The Sex is in the Heel," which they performed in drag last week on "The View."
8. We also noticed Simba's "man boobs."
10. Finally, whose idea was it for Bloomberg to wear a clown-sized tie? It seems he could have reprised the dummy sitting on the lawyer's lap selection from "Chicago," sitting on Sigourney's lap. It would have fit neatly into the flashback format of the evening.

I wasn't bothered by the word "gay" not being said, I was just alluding to the fact that all the other times NPH hosted it seemed like "gay marriage" or "gay Super Bowl" were bandied about as well as the regular tossing about of double entendres.