In an audacious display of visibility, 3,000 gay and lesbian Floridians converged on Orlando's unsuspecting Disney World on Saturday, June 1, 1991 to enjoy the rides and attractions with their friends - just like everyone else.  This "Gay Day" meet-up has continued on the first Saturday in June ever since - and expanded in a big way.

To make the gay attendees recognizable to each other, they were instructed to wear red-colored shirts - ironically, years before the color became linked with the Republican party.  Today the celebration now encompasses nearly a week of festivities, and all four Disney theme parks in Orlando participate as well as Universal Studio's complex.  The number of attendees now approaches 150,000.  Additionally, Anaheim and Las Vegas also have their own Gay Days events.

Like the first Gay Day, this popular gathering still isn't an official Disney event and the company doesn't publicize it, instructing employees to treat it like any other day.  As a result, unsuspecting heterosexual families are still taken by surprise and don't always take kindly to this "flash mob" incursion, reacting with shock and anger that their weekend has been ruined.  (If they ask for their money back, Disney accommodates them.) 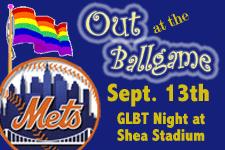 That first Gay Day was an early instance of prying open the eyes of the general public through visibility, which was anathema to the anti-gay religious right.  Since then we've become visible in most walks of life, e.g. portrayed on TV shows and commercials; voted into Congress; participating in the Olympics; working as successful business executives; and now the NBA and NFL each have an openly gay player.  And more than half of Major League Baseball's teams recognize their gay fan base by sponsoring LGBT nights.  (A gay male couple was even shown smooching on Kiss Cam at the Giants game in, where else, San Francisco!)