Reaching Out & Touching Someone in Fire Island: Memories of the Pines Phone Directory
Hot Bodies ... Refreshed by Cool, Clean Water

Jane Lynch Has Breakout Role Playing a Lesbian in "Best in Show" (September 19, 2000) 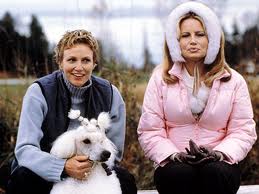 Jane Lynch had many supporting TV roles throughout the 1990's, but it wasn't until she appeared in Christopher's Guest's movie Best in Show in the autumn of 2000 that she registered on my radar.  Ironically, although she didn't come out publicly until a few years ago, she played a lesbian dog trainer in the film (photographed here with Jennifer Coolidge).  At the end of the movie there's a hilarious scene where Jane's character talks about her and her partner's new publishing venture, American Bitch, a magazine that focuses on the issues of the lesbian purebred dog owner.

After Best in Show she appeared in a number of other high profile movies between 2003-2009, all which I happened to see:

One trait of Lynch's I love is her friendly and dazzling smile, something that's missing from her most famous role, since 2009, of the villainous Sue Sylvester on the TV show Glee.  Sue is one of those classic TV characters who's quickly embraced by viewers but then soon becomes overexposed in ensuing episodes (see also: Kramer from Seinfeld; Mimi from The Drew Carey Show; Urkel from Family Matters; and Fonzie from Happy Days).  I can't stand seeing her in that warmup suit - and with that awful scowl on her face.

By 2010 Lynch seemed to have become the new media-annointed public face of gay America (a role previously played by the likes of Harvey Fierstein, Rosie O'Donnell and Ellen DeGeneres).  She did some commercials, hosted the Emmy's in 2011, hosted SNL and recently finished a one-month gig on Broadway in the musical Annie, playing Miss Hannigan (and performed a number from it at this year's Tony Awards, pictured).  And this summer she's hosting the primetime game show Hollywood Game Night on NBC.