When a Gay Bar Gouge Patrons - $10 Cover at the Monster!
Reaching Out & Touching Someone in Fire Island: Memories of the Pines Phone Directory 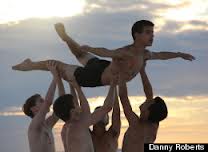 Fire Island Pines is surrounded by beauty - natural, architectural and physical.  And in the summer of 1995 Dancers Responding to AIDS further enhanced this rarefied environment when it organized the first DRA Fire Island Dance Festival there on August 5.  Showcasing dancers and choreographers from various highly regarded dance companies, the event was held outdoors, using Great South Bay as its background - lending its natural beauty to the breathtaking performances on stage.

This first event didn't have the best weather as it was foggy and on the cool-ish side, but the event struck a chord and soon was a regular part of the Pines social season.  An early evening show was added, then a performance on Sunday afternoon.  The Saturday evening performance has proven very popular as it offers the opportunity to view a breathtaking sunset as a bonus.  In its second year, the event moved to the third weekend of July.  I shared a house in the Pines with one of the coordinators of the program, so it became part of our house's culture - and we were always aware of any behind-the-scenes drama surrounding the event. 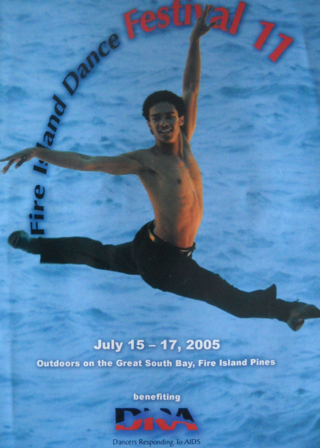 Of course, because it's an outdoor venue, weather is always a concern and some years have been blistering hot, others gray and threatening (thankfully, not the norm).  An unforeseen challenge for the evening performance was the formation of condensation on the stage, which could be perilous for the dancers, so it had to be wiped down constantly in between numbers.  One non-weather event put a somber tone to the event in 1999, as the dance festival occurred the day after John Kennedy Jr.'s plane went down off Nantucket.  It made gazing out at the water of the bay somewhat sobering.

Each performance opens with the DRA Fanfare, created and donated in 1999 by Philip Glass.  Hosts have included BD Wong; Bebe Neuwirth; Whoopie Goldberg; Bruce Vilanch; Alan Cumming; Ana Gasteyer; and Richard Move as Martha Graham.  Another host was Kate Shindle, Miss America of 1998, who joked that she was sorry she didn't have her crown because she wanted to toss it in the pool to see how many queens in the audience would jump in after it!  Photographer Bill Cunningham from the NY Times has often attended one of the performances and his photos have appeared a week or two later in the Sunday Arts & Leisure section - lending the event even more cachet.

Celebrating its 20th year in 2014, the Dance Festival has raised more than $3 million.  For more information about this year's DRA Dance Festival, double click here. 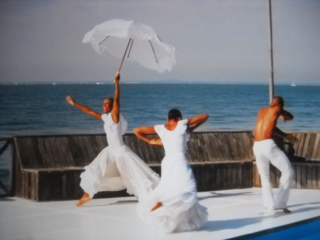 And for other ZeitGAYst posts about Fire Island:

Coming & Going in the "Meat Rack"

A Postcard Trip to the Pines & Cherry Grove

Summertime Memories: A Photo Tribute to the Pines & Cherry Grove