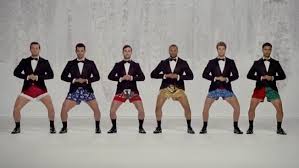 Now this is some "ballsy" advertising!  Kmart recently unveiled a holiday ad for the 2013 season for its Joe Boxer line of men's boxer shorts (titled "Show Your Joe").  In it six studly bell-ringers go from ringing traditional bells to shaking their balls while showing off their boxers in a quasi Chippendale's production.  Although risque, it's also charming, and Kmart maintained some dignity as the bell ringers kept their tuxedo jackets on throughout.  Gay apparel indeed - and a delightful ad you don't want to fast-forward through!  Double cllick here to view it.

Here are a few other holiday-themed posts you may enjoy:

A Salute to Ads that Spread Holiday Cheer