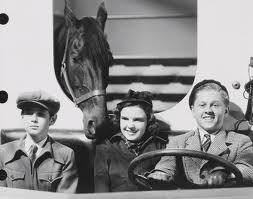 After Fred Astaire and Ginger Rogers, the next most popular movie pairing of the 1930s and 1940s was Judy Garland and Mickey Rooney.  Between 1937 and 1943 they appeared in eight movies together.  The first of these, Thoroughbreds Don't Cry, opened in theaters on December 3, 1937.  At the time Judy was 15 and Mickey 17.  (This was two years before The Wizard of Oz.)

Probably their most popular movies were Babes in Arms (1939); Strike Up the Band (1940); Babes on Broadway (1942); and Girl Crazy (1943).  (Available in a boxed set on Amazon.)  All contained delightful, over-the-top-musical numbers that could very well have been the inspiration behind Disney's wildly popular High School Musical franchise. 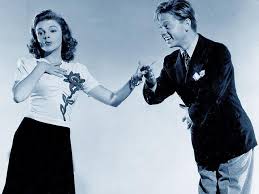 What's always struck me about these movies was the comportment of their characters.  Their interaction with each other and the other teens was what you might expect from adults in regards to being polite and in their formal introductions ("Miss Jones I'd like to introduce you to Mr. Miller.")  I realized that back then movies were used as a way to teach social skills to the masses.  Fast-forward to the present and the exact opposite is happening on TV as reality shows instruct viewers in how to be anti-social as a way to gain fame.

Besides their eight movies together, they also appeared in two other movies that weren't traditional Mickey and Judy movies; they appeared in just a few scenes together: Thousands Cheer (1943) and Words and Music (1948).

Tags: movies that Judy Garland and Mickey Rooney did together, Thoroughbreds Don't Cry