"Valley of the Dolls" - A Delightful, Trashy Mess of a Movie - And a Classic 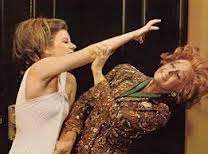 Valley of the Dolls was a huge best seller when the novel was published in 1966.  And it was an equally popular, although critically panned, movie that was released just before Christmas in 1967.  After adjusting for ticket price inflation, the $44 million it made at the box office (making it the 6th highest grossing movie of the year) is the equivalent of $300 million today.  Despite the date of its release, it would never be considered a holiday classic, but it's a beloved camp classic of many gay men.  (Perhaps the various Housewives iterations on Bravo were inspired by this movie? )

The movie tells the cautionary tale about the sordid underbelly of show business - Broadway as well as Hollywood.  Neely O'Hara, portrayed by Patty Duke, is "discovered", rapidly ascends to stardom, gets hooked on booze and pills, and then is discarded.  Judy Garland was the original choice to play the bigger than life Broadway star, Helen Lawson.  (However, it was Neely O'Hara's character whose professional life mirrored Judy's in terms of pills and liquor).  20 years after VOD was released I was introduced to the movie by my boss, who was gay. 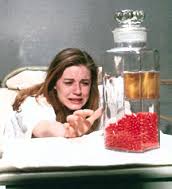 In keeping with the attitude toward gays in the 1960s, the portrayal of homosexuals in Dolls was not a positive one.  They were dismissively referred to as "fags".  Today, more than 50 years later, this portrayal is  somewhat amusing and instructive of how attitudes have changed.

There are so many wonderfully awful scenes to relish.  For example, Neely being discovered at a telethon; a montage of Neely's typical crazy day as she rises to stardom; the song "Come Live With Me"; Helen singing "I'll Plant a Tree" in front of Calder-like mobile (pictured); Neely and Helen's confrontation in the lounge at a restaurant; Neely grasping for her "dolls".

Here are a dozen of my favorite lines:

There are camp classics that are fine movies such as All About Eve and The Women, then there are the trashy classics such as Show Girls, Mommie Dearest, and then there is ... Valley of the Dolls.

In the fall of 1996 there was an off-Broadway production of Dolls that played at Village in the Square in Greenwich Village (Bleecker St.), starring Jackie Beat as Helen.  It was a parody which seemed odd considering it was already laughable in its original release.  I saw it twice.