The Andrews Sisters & My First Stirrings of "Camp" 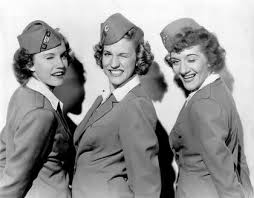 When I was around the age of 14 or 15 I saw a TV commercial for a compilation of the Andrews Sisters' greatest hits and I was captivated by Patty, Maxene and LaVerne.  Their harmony, their look, their pep!  My favorite song of theirs was Hold Tight.  And Bette Midler had a top-10 hit in 1973 with her cover of their WWII classic Boogie Woogie Bugle Boy (from her first album The Divine Miss M).  I also came to embrace other songs from the 40s, such as Hut Sut Song, Three Little Fishies and Elmer's Tune.  At the time I had no inkling about being gay (that would come a few years later), but my nascent gay sensibility was beginning to blossom.

Fast forward to the 21st century where in 2004 I was tickled by the inclusion of the Andrews Sisters' version of Winter Wonderland in the movie The Polar Express.  Then a few years later Christina Aguilera paid homage to them with her music video for Candy Man and its uptempo Big Band-like beat and military motif.

Here are links to two marvelous You Tube clips.  The first, from 1959, is an appearance by the Andrews Sisters on What's My Line?.  The second clip, from 1966, has them in a sing-off with the Supremes, performing each others' hits on Sammy Davis Jr.'s short-lived variety show.

When I became aware of the Andrews Sisters' music, part of its appeal was how old fashioned it was.  Today, however, when I look back at the popular music from 25-30 years ago by Madonna, Culture Club,  George Michael, or the Eurythmics, their songs don't seem like "oldies" at all - "classic" is more appropriate.  Ah, how different the world appears looking through the eyes of youth and the eyes of the AARP set!