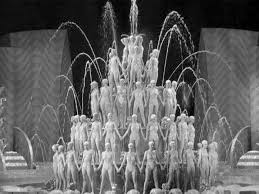 Asking a gay man to choose his favorite musical numbers from movies is like asking a woman to open her closet and pick out her favorite shoes (of course, it might be a challenge for a gay man as well).  It's fun and agonizing all at the same time.  And no matter how dreadful the movies themselves are, the musical numbers from musicals of the 1930s, '40s and '50s are immensely entertaining.  They tend to be inane and over the top, filled with thousands of frenetic singers and dancers.  Some have extravagant sets, others feature great dance routines, but all revolve around a wonderful song, often with delightfully zany lyrics.

I've divided the numbers I selected into two groups - those from the "golden era" and those of more recent vintage (post 1975).  Each performance has a link to a You Tube clip.

I Only Have Eyes for You (Dames/1934) - Mesmerizing and yet a bit creepy, this is one of hundreds of dazzling productions staged by the legendary Busby Berkeley.  In this clip the rather mousey Ruby Keeler is the object of Dick Powell's affection/obsession.  The New York subway system also plays a prominent role. 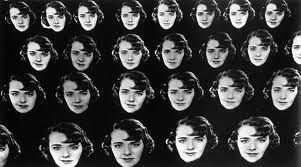 A Pretty Girl is Like a Melody (The Great Ziegfeld/1936).  This is one wild number.  It was shot on a huge revolving sound stage.  I'm still stunned at the end of the number when the camera pulls back to show the enormity of the set.  I would have loved to have been there to watch it being filmed. Waiting for the Robert E. Lee/Babes on Broadway (Babes on Broadway/1941) - This number comes in the final minutes of the movie and is part of a 15-minute number titled "Minstrel Show".  The men in blackface is a bit jarring; even Judy Garland's skin was darkened (but not blackened).  I love the catchy lyrics of Babes in Broadway, and the line "We're milking applause instead of milking a cow" always amuses me. 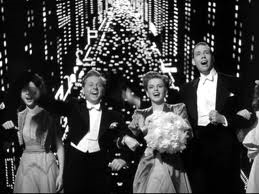 You Stepped Out of a Dream (Ziegfeld Girl/1941) - The handsome and debonair Tony Martin sings to the likes of Lana Turner, Hedy Lamarr and Judy Garland, among other Ziegfeld Girls.  (The clip, from TCM, is frustrating because the audio doesn't play and it's the only clip available.) Pass the Peace Pipe (Good News/1947) - Halfway into the number it becomes a dance extravaganza done to Indian drums.  Broadway star Joan McCracken (who was married to Bob Fosse in the 1950s) is the featured dancer. 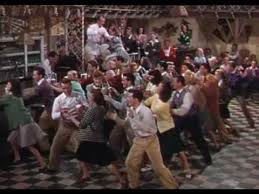 New York, New York (On the Town/1949). This number perfectly captures the bustling energy of the city it pays tribute to.  And Frank Sinatra, Gene Kelly and Jules Munshin, as Chip, Gabey and Ozzie look snazzy in their sailor suits.  One of the all-time great song lyrics is "The Bronx is up, the Battery's down. The people ride in a hole in the ground."  In a big change the number was filmed on location rather than on a Hollywood set. 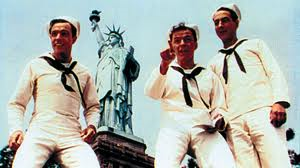 Good Morning (Singing in the Rain/1952).  This is an incredible dance performance by Gene Kelly, Debbie Reynolds and Donald O'Connor. 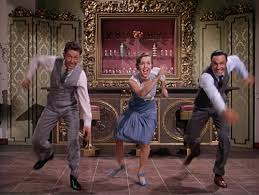 Triplets (The Band Wagon/1953).  Yet another number with just three performers.  It has clever lines such as "MGM has got a Leo, but Ma-ma has got a trio."  One of the triplets is Fred Astaire. 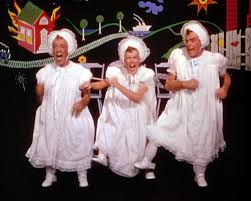 Sing Hallelujah (Hit the Deck/1957) - This is the movie's closing number with Tony Martin, Debbie Reynolds, Jane Powell and .... Ann Miller dancing up a storm on a battleship. 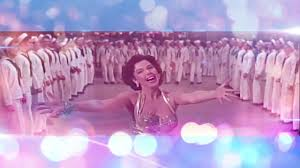 Stereophonic Sound (Silk Stockings/1957).  Compared to earlier choices with a cast of thousands, this routine used just two people.  And one of the two is Fred Astaire. 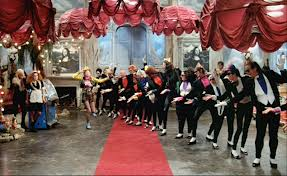 Summer Nights (Grease/1978) - This has got to be one of the most carefree numbers of any musical.  Many years later I was in heaven when I went to see Singalong Grease at the Ziegfeld Theater and eagerly participated in the singing of this number. 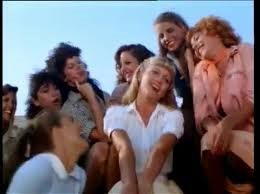 Xanadu (Xanadu/1980) - This is easily the worst musical of all that I've chosen, but its closing number is wonderfully cheesy.  When Olivia Newton John appears in her goddess regalia (pictured below) she looks embarrassed to be seen in it.  And at the beginning of the clip Gene Kelly is on roller skates at a roller disco!  Whenever this video came on at Splash the crowd would squeal with delight. Love is Good for Anything That Ails You (Pennies from Heaven/1981) - All of the music in this dark musical is from the 1930s and the numbers were lip-snyched.  This seems particularly odd since one of the stars of the film was Bernadette Peters.  This glitzy number, all in sparkling white and silver, begins and ends in a dreary school room during the Depression. Hindi Sad Diamonds (Moulin Rouge/2001) - From one of my all-time favorite movies, starring Nicole Kidman and Ewan McGregor.  I saw it at least half a dozen times during the summer of 2001.

Happy Working Song (Enchanted/2007) - Amy Adams already had one of her three Oscar nominations when she appeared in this Disney musical.  This number, which she sings to rats, mice, pigeons, flies and cockroaches was nominated for an Oscar.  Adams sang it on the telecast - but not dressed as Cinderella.

Without Love (Hairspray/2007) - A sweet song that builds to a nice climax.  I got a kick when the photo of Tracy Turnblad came to life whenever Link (played by Zac Efron, below) sang to it.

Jai Ho (Slumdog Millionaire/2008) - This selection is unique in that it was shown interspersed with the closing credits.  Also, the dancers didn't sing, they just danced over the recorded track.  It was filmed on the platform of Mumbai's main train station with a cast of hundreds.  At the Academy Awards the movie won for Best Picture and this song for Best Song. Cinema Italiano (Nine/2009) - This long delayed movie version of the Broadway musical starred Daniel Day Lewis in a singing role.  This particular number was written exclusively for the movie and features Kate Hudson.  With a cool '60s/La Dolce Vita vibe, it managed to temporarily rouse me from the stupor I fell into during this dull movie. With thousands of other numbers to choose from, I'd like to hear which are your favorites ...

In "Good Morning" from "Singin' in the Rain", it was DONALD O'Connor, not Dennis.

And "Triplets" from "The Band Wagon" also featured Jack Buchanan and the forever fabulous Nanette Fabray.

My favorites from "Moulin Rouge!" are definitely the wonderfully-named "Elephant Love Medley" with Nicole and Ewan, with the amazing Placido Domingo thrown in for good measure; and "Come What May", a killer "we'll make it no matter what" love song from Nicole and Ewan, in which they both absolutely wail (in a great way).

Thanks Maury, correction made!