Songwriter Paul Jabara (1948-1992) is best known for Last Dance, the Oscar-winning song Donna Summer performed in the disco-themed movie Thank God, It's Friday.  Besides being on the movie's soundtrack, a version sung by Jabara was on his album Keeping Time, which was released in May 1978.  The album also included another song from the movie, a throwaway titled Trapped in a Stairway.  However, the album's hidden gem was his 10-minute paean to Fire Island, Pleasure Island:

Get on a boat, take a train

Come to the island, Pleasure Island, with me

Walk on the beach, sit by the bay

Let the sunshine burn your worries away

Come to the island, Pleasure Island, with meeeee!

There's nothing like the Island to give you what you need

Nothing like the Island, you feel so good inside

The lyrics are concentrated in the song's first few minutes, followed by moaning that is gradually overtaken by a slowly building, Giorgio Moroder-like beat.  The moans of ecstasy are somewhat reminiscent of Donna Summer's in Love to Love You Baby, except that Pleasure Island's moans come from a man.  It's an absolutely beautiful song that perfectly captures the mood of languid hours spent at the beach followed by dancing and nighttime conquests.

The Village People had released their debut album the previous year, and it also had a song that saluted Fire Island.  Simply titled Fire Island, it was an over-the-top, campy romp.  Pleasure Island, by contrast, was far sexier and had a more complex song structure.

I didn't make my first visit to Fire Island until 1981, so these two songs, as well as Larry Kramer's novel Faggots, served as the inspiration for the images created in my mind of the place.  And, as it turns out, they were quite accurate.  (A great companion piece to this post is photographer Tom Bianchi's coffee table book of photos, Fire Island Pine Polaroids, 1975-1983, published in 2013.) 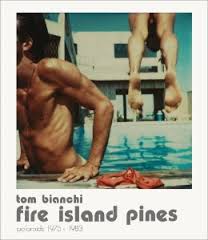