The "Closet Case" - Still Not an Endangered Species
"The Land of Misfit Toys" - An Early Gay Anthem? 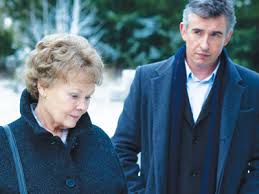 I've written previous posts about two movies with gay storylines I was unaware of - Valentine's Day (2010) and The Best Exotic Marigold Hotel (2012).  Now I can add a third to this list - Philomena, the Oscar nominated movie about a woman's search for the son she gave up for adoption 50 years earlier.  And although I didn't get around to seeing the movie until ten months after its release (on Nov. 22, 2013), and despite the fact that friends and family saw the film months ago, and I had read reviews in Entertainment Weekly and the New Yorker, I was taken completely by surprise by the gay storyline, i.e. Philomena Lee's son was gay and died of AIDS.

I enjoyed the movie, shed a good amount of tears.  However, although it was based on a true story I was skeptical about Philomena (played by Judi Dench) not being shocked when told that her son Michael was gay.  She confided that she wasn't surprised and took the news in stride because he was a sensitive little boy.  Still, since Philomena was a product of the mores of the 1940s and 1950s, her enlightened attitude didn't ring true for me.

Near the end of the movie there was a confrontation between the journalist helping Philomena find her son (played by Steve Coogan) and the elderly nun who knew the truth about his adoption.  The nun, in her appearance and self-righteous anger, bore a disturbing resemblance to Dick Cheney.