Naming Names ... Counting the Gay Men in My Life
The Low Profile of Gay Games 9 in Cleveland 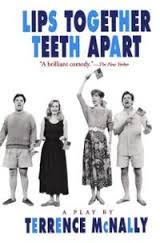 Straight couples in the Pines?  Nowadays they're no longer a novelty (nor are gay couples with kids), but 25 years ago they were.  The play Lips Together, Teeth Apart, written by esteemed playwright Terrence McNally, looks at two such couples spending the 4th of July holiday in the Pines in 1990.  They're staying at the house formerly owned by David, the gay brother of one of the women.  He recently died of AIDS, and she inherited the house.  Not only is neither couple familiar with the Pines, but with gay life in general, and with AIDS.  Lips Together opened off Broadway on May 28, 1991 during some of the worst years of the AIDS crisis in terms of deaths (and a few years before protease inhibitors transformed AIDS from being a death sentence to more of a chronic, manageable scourge).

The cast of four was comprised of Christine Baranski, Swoozie Kurtz (the sister who inherited the house), Nathan Lane and Anthony Heald. 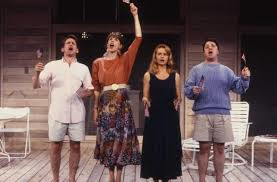 Lips Together was staged two years after McNally's production of The Lisbon Traviata and three years before Love! Valour! Compassion!  All three had Nathan Lane in their cast.  (He portrayed gay characters in Lisbon Traviata and Love! Valour! Compassion!, but played a straight blue collar type in Lips Together.)  I saw both of those plays, but not the original production of Lips Together.  I did see a revival of it, however, in the fall of 2014. 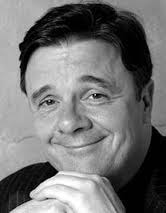 The action takes place out on the deck of the house and it's a perfect reproduction of a Pines beach house, i.e., the architecture, sliding doors, pool, outdoor shower, house flag, kite and even a bug zapper.  And although there is unenlightened conversation about AIDS and gay men, much of the play delves into the the four personalities and the struggles they are going through with their own lives.  And although it had constant moments of levity, overall it was a downer as it addressed subjects such as AIDS, prejudice, infidelity, cancer and death by drowning.

This show is especially interesting if you've spent time out in the Pines.  However, one aspect of the production that was unrealistic for me was that neither of the neighboring houses on either side ever played disco music, just classical or jazz.  Speaking of music, there's a funny scene in which the characters bicker over the title of the show tune, There's No Business Like Show Business.  Of course, because the play takes place in 1990 they weren't able to use Google to end their argument! 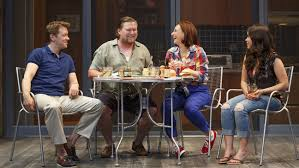 Cast from 2014 revival at 2nd Stage Theater in NYC

I liked it, but it was a downer as it addressed AIDS, cancer, infidelity, drowning. There was no happy ending. There is a sentence in the post at the end of the fourth paragraph that touches upon these sentiments.