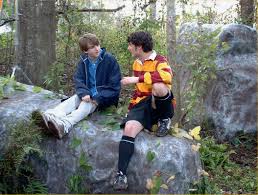 Recently my friend Maury shared with me a charming 15-minute film from 2006 titled Davy & Stu.  Taking place in a misty Scottish bog, it shows the playful teasing and longing between two teen boys.  Davy (in the blue jacket) seems well aware of his sexual orientation while the more rough at the edges Stu is struggling with his, but it's obvious he desires Davy's attention.  After they perform somewhat of a mating dance, the film ends with a stunningly beautiful moment when Davy approaches Stu, gently places his hand under his collar, touches his chest, quietly says to him that he smells nice and thanks him for cleaning up for their meeting.  Stu responds by gently nuzzling Davie's neck - and then the camera moves away.  This little gem of a movie, enhanced by the characters' lilting Scottish brogues as well as their beautifully expressive faces, brought to mind Brokeback Mountain which, interestingly, was released just six months before Davy & Stu.