The Gay Storyline of the Movie "Philomena" (November 22, 2013)
Chanticleer - Voices of Angels (In Tuxedos)

"The Land of Misfit Toys" - An Early Gay Anthem?

The beloved Christmas special Rudolph the Red Nosed Reindeer made its debut in 1964 when I was in the Second Grade.  For me the highlight was the song, The Land of Misfit Toys.  Without knowing why, I identified with this plaintive, sweet number about outcasts who were banished (through no fault of their own).  This included Herbie, the elf who wanted to be a dentist.  As we all know, Rudolph becomes the Moses of the misfits, persuading Santa to include them in his deliveries around the word alongside the "normal" toys. 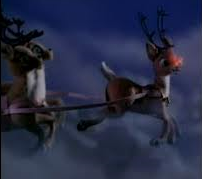 Of course the song's progressive message is for anyone who feels out of place and yearns to be accepted by society (however, not all of us feel that way and actively seek out the Land of Misfit Toys, such as Fire Island, Provincetown or San Francisco).  Years later the Disney TV movie High School Musical had a variation of this song, Stick with the Status Quo.  And Misfit Toys was later performed on a Christmas episode of Glee, known for tackling gay issues.

I'm enjoying the blog. That's why I made it this far. I don't want to be a pedant but the elf's name is: Hermey. Anyway, enjoying making my way backward through your posts.

Thanks very much for pointing out that error. I wonder if I knew his name was Hermey when I was a little kid? Perhaps I was confusing him with Herbie, the Volkswagen Beetle from the Disney movie "The Love Bug". And for whatever reason, when I read what the dentist's correct name was, I thought of Miss Piggy's nickname for Kermit the Frog, but that, of course, is Kermie. So much confusion!