Tattoos - Why?
Gaydom's Basket of Deplorables

Michael Sam - First the NFL, Then the Cover of GQ 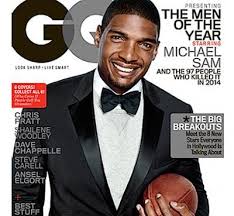 Not only does defensive end Michael Sam have the distinction of being the first openly gay player drafted by the National Football League, but later that same year (2014) he became the first openly gay person to appear on the cover of GQ.  In GQ's history there have been a handful of closeted cover subjects (e.g., Rock Hudson, Greg Louganis, Kevin Spacey) and NFL players have been well represented (including Mark Sanchez, Tim Tebow, Colin Kaepernick, Cam Newton, Tom Brady, and Tiki Barber), but never before had someone who was openly gay and an NFL member graced its cover until the 24-year-old University of Missouri graduate was chosen for the honor.  And although he, ultimately, was released by two teams and never clocked any playing time, Sam's appearance is still a milestone to salute.  (An honor not bestowed upon openly gay NBA player, Jason Collins, who came out a year before Sam and briefly played for the Brooklyn Nets in 2014 before retiring at the end of the season.)

Sam will garner more attention in March when he appears as a contestant on ABC's Dancing with the Stars, becoming the show's third LGBT participant (Lance Bass, Carson Kressley and Chaz Bono were the others).