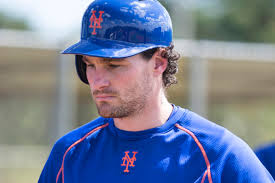 Earlier this week (in March 2015) New York Mets second baseman Daniel Murphy let it be known that he "disagrees" with the gay lifestyle.  This isn't the first time the Mets have been thrust into the glare of controversy over the subject of homosexuality.  In 1999 Atlanta Braves relief pitcher John Rocker made homophobic comments about New Yorkers in an interview in Sports Illustrated.  He confided that he'd never want to play for a New York team because of his experience riding the 7 subway to Shea Stadium, where he found himself sitting next to "some queer with AIDS, a dude next to him who just got out of jail for the fourth time, next to some 20-year-old mom with four kids."  Then in 2002 catcher Mike Piazza called a press conference to dispel rumors that he was gay.  This happened shortly after Mets manager Bobby Valentine said in a magazine interview that he expected a player to come out shortly (we're still waiting).

Murphy's comments came after the Mets hired Billy Bean, a ballplayer from the 1990s who's now openly gay, as Major League Baseball's first "ambassador of inclusion".   Specifically, here is what Murphy said: 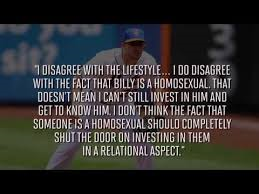 As I see it, saying that he disagrees with the lifestyle of individuals created by God strongly suggests Murphy questions God's wisdom.  Hardly a trait of someone described as "devout" - unenlightened would be a better descriptor.  I suppose he also "disagrees" with the "lifestyle" of pork eaters; those who mix meat and dairy (e.g., eating a cheeseburger); have sex with a menstruating woman; work on the Sabbath; or who aren't circumcised - all activities proscribed in the Bible.  This brings to mind some of conservative bishops who have voiced dissent over Pope Francis's messages of inclusion.  Since the pope is the conduit of God, shouldn't these apostates be banished?  I'm also reminded of the homophobic teammate in the Broadway drama Take Me Out from the early 2000s. 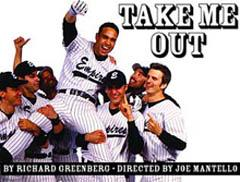 I'd like to know what in particular Murphy finds so "disagreeable" about the gay "lifestyle".  Is it singing show tunes, having a love of the arts, dancing ability, our witty repartee and bon mots, possessing good taste?  Perhaps it's the courage to live one's life as it was meant to be and not cower in fear or shame?  Or is Murphy's message an attempt to conceal his own homoerotic desires?  After all, Christians who are in the public eye expressing righteous indignation as a way to provide cover for their own desires have become a cliche.

Although I respect Murphy for saying what he believes I'm a bit disappointed that Billy Bean (pictured below), was so accommodating to him.  (He says he'd like to have further discussions with Murphy in the hopes of "enlightening" him - that reads like a premise for a porn movie to me!)  However, chances are Mets management asked Bean to respond in a conciliatory fashion since they'd rather alienate gay fans than their Christian fan base, which is probably far larger, especially in cities such as Atlanta, Cincinnati, St. Louis and Houston.  But give the Mets credit for hiring Bean in the first place. 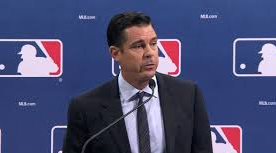