The Wide Chasm in Worldwide Acceptance of Homosexuality
Welcome Back, Giorgio Moroder!

The Dilemma of Having a 'Gay' Voice 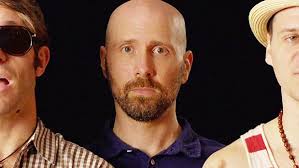 Recently I saw the documentary Do I Sound Gay?, which explored the anxiety the doc's director, James Thorpe, had over his voice.  Although it was amusing, I found it curious that a gay man in his 40s living in New York City in 2015 had a hang-up about his voice being too gay.  The film follows him as he seeks to change his voice to one, as I interpreted his goal, devoid of any personality.  In my mind this dilemma was a good example of "white people problems".  And his visits to a speech therapist brought to mind a form of gay reparative therapy.  (By the way is there a stereotypical lesbian voice?)

Besides discussing his concern with speech therapists, linguists and acting coaches, the director also discussed the phenomenon of gay-sounding voices with gay personalities such as Dan Savage, Tim Gunn and George Takei.  For me, one of the highlights of the doc was finally getting the chance to meet author David Sedaris' husband, Hugh. While viewing the documentary I thought of a high school classmate, Mark, who had a very gay-sounding voice.  We were friendly, but at the time I wasn't aware that I was gay so there was never any discussion about it (this was in the mid-1970s), but I think, subconsciously, it was why we were friendly.  He was also obsessed with Cher, so that, more than his voice, should have been the giveaway that he was gay.  I was curious to see if I could find Mark on Google, and my search proved successful.  Sadly, though, it turned out he had died in 2006.  His obituary mentioned his male partner. 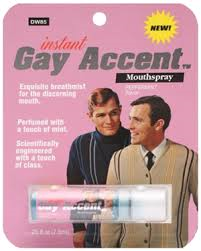 As for me, although I was teased a little bit in high school about being a "fairy", I wasn't bullied and I didn't dread going to school.  (And the teasing  ended when I was named editor of the yearbook.)  As an adult I never had issues about my voice sounding gay, but I was always surprised when I was told I didn't sound gay.  However, about ten years ago I went to see a speech pathologist to see if she could help me make my voice more commanding in a business setting since I found it challenging to break through  chatter at meetings whenever I wanted to ask a question or make a comment.

Despite it being entertaining as well as instructive, apparently Do I Sound Gay?  wasn't compelling enough for moviegoers as it played in just 17 theaters and grossed less than $100,000 (paltry even by gay indie film standards).