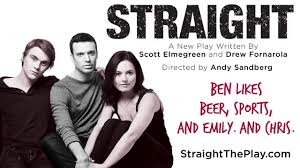 I was somewhat puzzled watching the new play Straight (at the Acorn Theatre on 42nd St.)  As it unfolded I opened my Playbill to verify that it was taking place in the present day, and not 25 years earlier.  The reason for my puzzlement is because Ben, a closeted man in his 20s, is in a relationship with Emily, who wants more of a commitment, while at the same time being involved with Chris, his twink plaything.  The plot brought to mind Elaine Stritch's oft-quoted line from The Ladies Who Lunch, "Does anyone still wear a hat?", except I was thinking, "Is anyone still closeted?".  Midway through the play Ben somewhat jokingly tells Emily that he's gay, but I sensed that he wouldn't have minded if she took him seriously.  Alas, she doesn't and his double life continues.

The only time that Ben says "I love you", it's to Chris as they were settling into bed after a heart-to-heart talk.  Ben didn't even say those words to Emily after (spoiler alert!) he proposed to her.  However, I don't believe Ben loved Chris - he lusted for him.  Of the three characters, Chris was probably the lucky one, even though he was going to get hurt either way.  I felt it was better he got his heart broken when he did because if Ben had embraced his gayness he probably wouldn't have stayed with Chris for very long because of all of the opportunities he'd have  meeting men, many more suited to him. 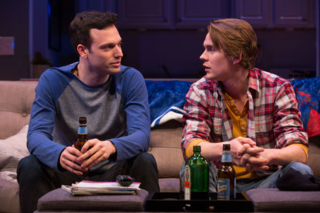 I didn't feel much sympathy for Ben - nor was he a very interesting character.  I did, however, empathize with Chris and Emily, who were likable characters and nicely played (and it was refreshing that Emily wasn't a shrew).  When the play came to an abrupt end, with a surprise ending, I didn't care that Ben's dilemma was going to deepen, pushing him further into the closet and most likely without the outlet Chris provided.  Furthermore, besides struggling with his same-sex attractions, Ben was also unhappy with his job.  Get this man to a therapist - pronto.

Ben's situation brought to mind a boyfriend I had when I was new to New York.  He had been married and had two children but then lived a gay life for five years before marrying again.  He told me that he felt more comfortable being with a woman because it made life easier.  But that was 30 years ago (and at least he got a good taste of gay life - his journey is a more interesting one than Ben's).  Today, with same-sex marriage and the presence of children in gay households becoming more common, the plight of being closeted seems from a time long, long ago.