Gay men have regularly been the target of fire-and-brimstone types who admonish that, according to the Bible, two men who "lay" with each other is an abomination.  Happily, this never caused me any sleepless nights.  However, their admonition about forbidden love came to mind when I moved to New Jersey in 1979 to begin my first job across the Hudson in New York.  During my initial weeks I became aware of a chain of discount stores called 'Two Guys'.  What got my attention was the store's tag line, "Two Guys ... "Naturally".  I was taken aback, what was up with that?  This vexed and amused me all at the same time because it was diametrically opposed to what society was constantly telling homosexuals.

I found it curious that no one else seemed to give it a second thought.  I suppose it was because 1) they grew up with the store and 2) if they were heterosexual they never had the "laying with another man" line thrown at them.  (This was different from the Ben Gay brand,  which everyone snickered at.)  And it wasn't as if the store was founded from a wellspring of enlightenment and tolerance since the first store opened in the gay Dark Ages of the 1940s.  Then I read about the store's history and I discovered that the word "naturally" was part of a longer tag line that was shortened from, "We save money for you at Two Guys ... naturally."  So this was just a matter of my gay wiring putting a comical, ironic spin to it (as we homosexuals are wont to do).  Alas, the chain went out of business in the early 1990s.  It was ironic that as gay men rose in acceptance the store with the peculiar, suggestive name foundered. 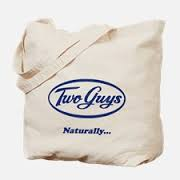