In the spring of 1981 I read an article in TIME Magazine that enthusiastically reported on a collaboration between Stephen Sondheim and Hal Prince for the show Merrily We Roll Along.  Since I was still gaining my bearings as a young, single, gay man in New York I lost track of the show's progress, but the positive tone of the article stayed with me.  Years later I discovered that it was a huge flop, closing after just sixteen performances.  The show's trajectory is the subject of the documentary The Best Worst Thing That Ever Could Have Happened, which I recently saw at the IFC in Greenwich Village (just one of three theaters nationwide where it played).  It was directed by one of the three actors with a lead role in the show.  It's a touching film, capturing the giddy excitement of the young cast (who were between the ages of 16 and 24), followed by their crushing disappointment. When "Merrily We Roll Along" was in development, Hal Prince was 52 and Stephen Sondheim was 50.

I was surprised to learn that Jason Alexander of Seinfeld fame was in the show's original cast (and he'd win a Tony Award in 1990 for Jerome Robbins' Broadway, just as his TV fame was beginning).  The show was also where singer/cabaret icon Liz Callaway made her debut (at the age of 20).  And perhaps most interestingly, the documentary included interviews with the original lead, who was replaced during previews.  He was very gracious and now owns a talent agency.  (And according to the IMDB database he's had no other acting credits since, except for the 1981 movie Senior Trip.) 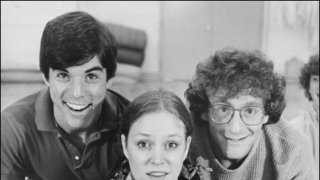 And with Weissenbach's replacement, Jim Walton

In 2000 I finally got around to buying the cast CD (which was recorded the day after the show's closing).  I was surprised to discover three songs I was already familiar with: Good Thing Going; Not a Day Goes By (first heard on Carly Simon's album, Torch); and Our Time (which I heard sung by the NYC Gay Men's Chorus).  Then in the winter of 2012 I saw a City Center Encores! production of the musical, and although I struggled during the first half hour or so, I became more engaged as the show went on.  (One of the main characters was played by Lin-Manuel Miranda.)  After seeing it I could understand why the show might have been off-putting to audiences as its themes of youthful ambition thwarted, lofty ideals compromised and friendships ended may have hit too close to home for many.  However, since its initial rejection by audiences, the show has been embraced by a an ever expanding group of appreciative theatergoers. 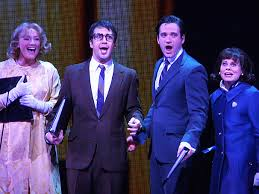 Watching the documentary I thought back to my life in 1981, when I was the same age as some of the older cast members.  1981 was my third year working in New York, and the year I moved into Manhattan - first into a loft in TriBeCa (which was yet to be a chic neighborhood), and three months later to the West Village.  During Memorial Day weekend I visited Fire Island for the first time; another first came a few weeks later when I went to the hot new dance club, the Saint.  Later that summer I left my first job and went to work at the powerhouse ad agency, Young & Rubicam.  (At the time I didn't know that a few of the men I worked with were gay).  Then in November, a few weeks before Merrily had its opening, I met (at Uncle Charlie's bar in Greenwich Village) the man who I would have my the deepest relationship with. Finally, 1981 was also the year that the scourge that would become known as AIDS began to get news coverage.

Double click here for a nice write up about the show's heritage.