When Grindr Came Calling - At the Office!

This week began in an interesting fashion.  As I was shifting into work mode on Monday morning, a meeting reminder popped up on my laptop, and I did a double take when I read that Grindr was giving a presentation at my office (it would have been a spit-take if I hadn't already finished my coffee).  Yes, Grindr!  Of course, I was very curious to hear how Grindr would position itself (no pun intended).  Amusingly, its director of ad sales used the term "experiences" rather than "hook ups" to describe the app's primary purpose.  But he added that the service, especially in the nation's hinterlands, was also a vehicle for making friends and building social communities; I raised a skeptical eyebrow - was "social communities" code for "orgies"?

Sitting there I thought back to presentations I attended in the 1980s in which the ad sales director of GQ tried his best to downplay the magazine's substantial gay readership because, in those days, non-fashion advertisers weren't keen to be found in a publication with those type of readers (especially automakers).  And a magazine like The Advocate couldn't even get its foot in the door of an ad agency.  So that's why today's presentation was so refreshing, because here was Grindr, embracing its gay subscribers.  However, even in these more enlightened times, I wondered if any mainstream advertisers would be eager to be associated with an app that has a rather salacious reputation (to put it mildly) - as suggested by this snarky meme:

Some interesting stats were shared with us: On average, a Grindr subscriber is on the app 56 minutes each day (compared to 8 minutes/day for the typical Tinder user) and checks it 35 times.  However, the best statistic was that, based on Grindr's location-based stats, the gayest spot in the world is the Starbucks at the corner of 52nd St. and 8th Ave. in Manhattan (and all these years I assumed the gayest spot was the Vatican)! This Starbucks ... Gayest Spot on Earth?

As I continued listening to the sales pitch my mind drifted off as I mused that Grindr seeking advertising partnerships would have been comparable to the Saint Mark's Baths doing the same in the 1970s.  Yes, we've certainly come far from the time when The Advocate felt compelled to remove its 'Personals' section in order to attract advertisers.  But have we lost something by having the tawdry side of our lives (although presented in an amusingly sanitized way by Grindr) appropriated by social media ? 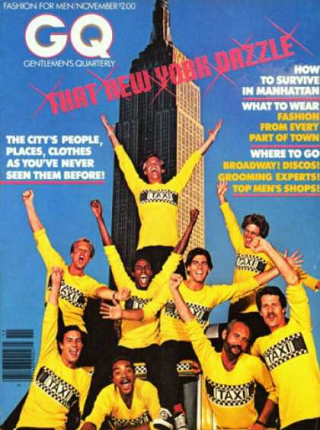 In the 1970s and '80s GQ had a difficult time attracting national advertisers because of its gay vibe.

Tags: director of ad sales, Grindr, Grindr presentation, the Starbucks on the corner of 8th Avenue and 52nd Street

I suppose it doesn't surprise me that the hottest Grindr spot is in Hell's Kitchen. A sure sign that the nexus of the gayborhood has shifted there from Chelsea.

I suppose since there are at least ten bars/club surrounding that Starbucks that guys see each other out and about and decide to meet there for coffee (or to just chat out front before deciding whether or not to hook up).