When Grindr Came Calling - At the Office!
Mirror, Mirror - Who Are the Fairest, Sexiest World Leaders of Them All? 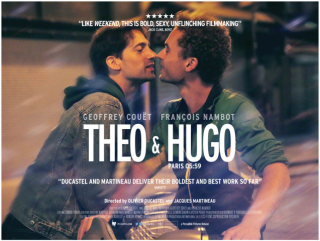 Aah, memories of young love.  The French film, Paris 05:59: Theo & Hugo, takes place over the course of two pre-dawn hours, and begins with an extended, explicit scene in a sex club, where Theo and Hugo meet and are smitten.  They leave together, but their giddy rapture is short lived when Hugo learns that Theo hadn't used a condom when he fucked him (and came in him) - and Hugo is positive.  Recriminations are cast, but the two immediately proceed to a nearby ER where Theo gets a 30-day package of anti-virals (the scene with the nurse has a very Afterschool Special feel to it).  As they slowly learn about each others' lives, they have occasional outbursts of anger and try to push the other away, but it's clear the two still want each other.

Having lived through the AIDS crisis, getting educated about HIV and participating in a drug trial, I wasn't shaken by their plight (actually, I thought it was a bit overblown).  After all, Hugo was the receptive partner and his viral load was undetectable.  Still, I applaud the director for showing the angst these two young pups experienced since, nowadays, it seems this type of concern isn't prevalent, especially since the introduction of PrEP.  And this is the first movie I've seen in which the poz individual took the negative person to task for not sharing some responsibility for what happened, i.e. when Theo chose not to use a condom he could have asked Hugo about his HIV status. 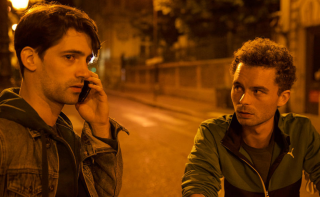 Hugo making the call to the ER after revealing to Theo that he's positive.

Bottom line, I liked the movie.  In addition to the film's first eighteen minutes (and the insistent, sleazy EDM track in the background) I enjoyed it for its realistic portrayal of youthful exuberance.  It brought to mind the times, back in my "salad days", when I went without sleep after encountering new-found love in the wee hours of the morning, which kept me energized after the sun came up.  Finally, I love Paris and hearing the French language - especially when spoken by two adorable characters like Theo and Hugo.