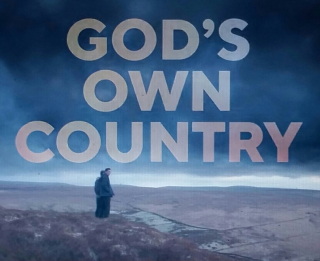 The film, God's Own Country, is a slow-burn gay romance set on a farm in England's Yorkshire countryside where a disabled farmer's son, Johnny, is burdened with deadening chores.  To give him some relief a young migrant farm worker from Romania, Gheorghe, is hired.  Johnny is closeted and sullen; Gheorghe, polite and exuding a gentle nature, slowly connects with Johnny, a young man whose emotional life has been stunted from a lack of physical affection.  Gheorghe, by contrast, seems heaven sent (case in point, he nurtures an orphan lamb, cuddling him inside his jacket).  This is a deeply touching movie, with a number of heartwarming scenes between Johnny and Gheorghe as Johnny slowly warms to Gheorghe's tenderness (in contrast to his furtive, drunken hookups in a bathroom stall at the local pub). 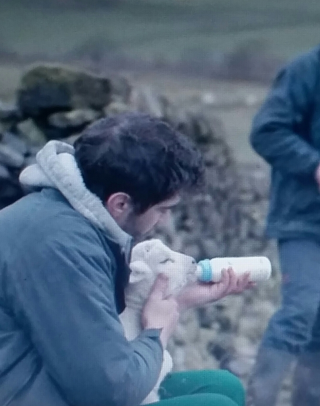 Watching this film, scenes from three movies popped into my head: 1) A rough-sex scene (augmented by spit) between Johnny and Gheorghe easily brought to mind Brokeback Mountain; then later in the movie, after Gheorghe abruptly quits the farm, Johnny comes across a few articles of his clothing which he smells longingly; 2) Like The Taming of the Shrew, Gheorge breaks Johnny after he taunts him with the epithet "gypsy", pinning him to the ground and establishing his dominance (pictured below); and 3) Calling to mind An Officer and a Gentleman, Johnny, full of remorse after being caught in the pub men's bathroom boffing a stranger, comes to get Gheorghe back from the potato-processing plant he stormed off to. 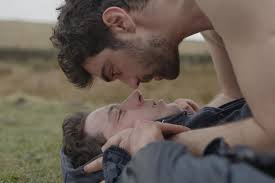 If the movie has a flaw it's the portrayal of Gheorghe as a person who is flawless - a knight in shining armor.  He's hardly your typical migrant worker.  Yet, the movie ends with us knowing very little about him, leaving me wondering why a fellow who spoke fluent English (his mother taught English) and was somewhat of a Martha Stewart around the farm (e.g., after skinning a dead baby lamb he fashioned a little wool jacket that he put on an orphaned lamb), didn't aspire to something beyond farming.  However, despite these reservations, I still highly recommend the movie. 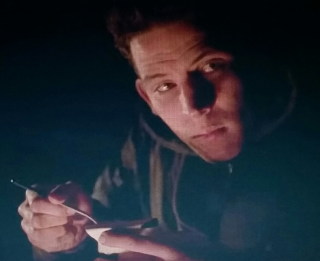 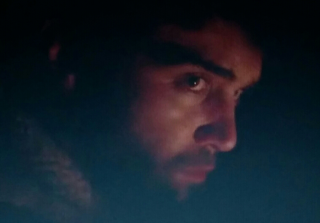 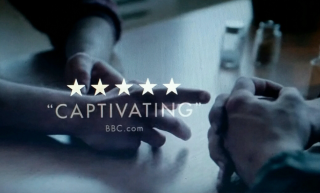 Here are a number of other past movie reviews:

Call Me By Your Name

Stranger by the Lake

Do I Sound Gay?