Adam Rippon - The Pumpkin Spice of Gay Celebrities?
Renowned Greenwich Village Gay Bar Co-Stars in Movie "Can You Ever Forgive Me"? March 4 - James Ivory won the Oscar for Best Adapted Screenplay for Call Me By Your Name.

March 16 - The gay teen romance Love, Simon opened in theaters and became the eleventh highest grossing film with a gay theme or prominent gay character, taking in $41 million at the domestic box office.

April 27 - A documentary about former Vogue editor-at-large Andre Leon Talley, The Gospel According to Andre opened in theaters.

May 21 - Although he didn't win a medal for the US in the Men's Singles Figure Skating competition at the 2018 Winter Olympics, openly gay figure skater Adam Rippon won Dancing with the Stars: Athletes. May 31 - A revival of Boys in the Band opened on Broadway in the 50th anniversary year of the play's original Broadway debut.

June 4 - In a 7-2 vote, the US Supreme Court ruled that a baker in Lakewood, Colorado could refuse to make a wedding cake for a same-sex couple. July 9 - After a previous rainbow sculpture celebrating gay pride in Warsaw (the capital of Poland) was repeatedly vandalized, a new one was unveiled that is "unbreakable" - a hologram projected on a curtain of water, making it resistant to most forms of defacement. 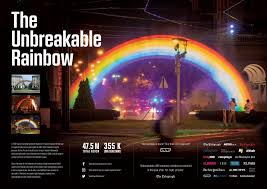 July 20 - Eight years after his suicide, at the age of 40, a documentary about fashion designer Alexander McQueen opens in theaters.

July 25 - Cher is announced as one of this year's recipients of the Kennedy Center Honors.

September 18 - Sesame Workshop, the education organization behind the children’s program Sesame Street, issued a press release stating that the beloved characters Bert & Ernie “do not have a sexual orientation.”

November 22 - A same-sex kiss was aired on Macy's Thanksgiving Day parade for the first time. The kiss was between two female characters during the conclusion of a number from the Broadway show Mean Girls. 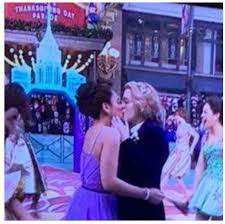