Review of "The Cakemaker" - Affection Through Confection 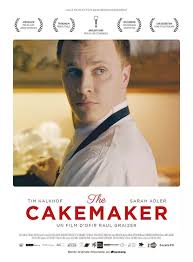 No, The Cakemaker isn't a documentary about the Colorado cake maker who refused to make a wedding cake for a gay couple.  Rather, it's a touching (albeit slow-moving) drama about the life of a Berlin baker, Thomas, after his married Israeli boyfriend, Oren, is killed in a car accident (the actor who plays Oren bears a striking resemblance to Daniel Day- Lewis).  Seeking some sort of solace Thomas goes to Jerusalem where he ends up befriending Oren's widow, Anat, gets a job working for her at her newly opened cafe and draws customers with his delectable baked goods.  Oddly, Anat shows no curiosity about Thomas's background nor does she ask him about his reasons for coming Israel.  Meanwhile Anat's brother isn't thrilled that a German Gentile is working in a kosher establishment.  (There are subtle jabs at Orthodox Judaism as it applies to its strict dietary laws.)

The cherubic Thomas has a doughy, but surprisingly sexy, physique which, we get to see in a number of scenes when he's showering, lounging in Oren's red Speedo or, in flashbacks, of he and Oren making love.  He's a gentle soul who came to Jerusalem with no sinister agenda in mind.  (An aspect of the movie I liked was having it set in Jerusalem rather than cosmopolitan Tel Aviv.)

Although the movie falls into the "gay" genre the story doesn't immerse itself in depictions of gay life.  In fact, considerably more time is devoted to showing his interaction with Anat (which turns romantic) than with Oren.  There are some furtive cruising done at a gymnasium and at a park but Thomas never acts on it.  Touching scenes with Oren's mother suggest that she knew that Oren was gay and seems to intuit it about Thomas as well.  She acts in a caring, motherly fashion towards him but I didn't know if it was because, perhaps, Oren confided in her, or because, sensing Thomas was gay, she liked having him around because it may have brought back memories of her son.

Near the end of the movie comes a heartrending reveal when Oren's widow, who still isn't aware of the romance between Thomas and Oren, confides in him about what transpired shortly before Oren's accident, a story that devastates Thomas because he learns that Oren's feelings for him were deeper than he imagined.  Little did he know how very close they came to being together in Berlin in a full time relationship.  His restrained emotional reaction upon hearing this account is difficult to watch.

This is the second Israeli film I've seen with a gay theme.  The first was Yossi & Jagger, which I saw in 2002.  It told the story of two Israeli soldiers, stationed in the no-man's land between Israel and Lebanon, who are surreptitious lovers.  This made the affection between them even more affecting.  Death also separates the two but, unlike The Cakemaker, it comes near the end of the movie.

Other movie reviews that may be of interest:

Call Me By Your Name

Do I Sound Gay?

Stranger by the Lake