Renowned Greenwich Village Gay Bar Co-Stars in Movie "Can You Ever Forgive Me"? 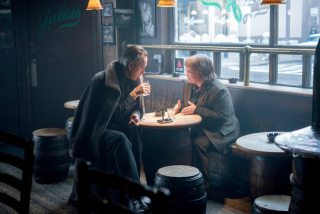 The Greenwich Village bar, Julius's, plays a prominent role in the true-life drama Can You Ever Forgive Me?, which stars Melissa McCarthy and Richard E. Grant (both received Oscar nominations for their roles).  The bar is celebrated in the annals of gay history because it's where the famed 'Sip-In' took place in 1966 (three years before the Stonewall riot).  Throughout the movie Julius is where the main characters confide, plot and ultimately reconcile.  In total I'd say the bar has at least 15 minutes of screen time.  (Besides the bar, regular appearances are also made by a cat and a manual typewriter.)  Perhaps Hollywood might consider honoring Julius with a special Oscar for best use of a bar in a movie (after all, Judi Dench got an Oscar for less time on screen in Shakespeare in Love!).

McCarthy and Grant play gay characters - biographer Lee Israel, and aging hustler/party-boy Jack.  And while the movie wasn't promoted as a "LGBT film", there is a steady amount of understated same-sex moments interspersed throughout the story.  For instance, Lee has a flirtation with a female bookstore owner and has a meeting with her ex, while Jack has a dalliance with a flirtatious waiter.  In addition, two other male characters who work at vintage bookstores give off a definite gay vibe (one of them is played by Stephen Spinella).  And AIDS rears its ugly head.  Although the movie is depressing, with shadowy interiors, gray skies and revelations about personal dysfunction, I enjoyed it a lot; Lee and Jack are two great character studies. 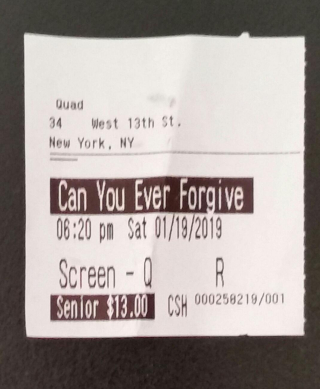 Now, back to Julius.  Located at the corner of Waverly Place and W. 10th St., it's a few minutes from my apartment as well as the Stonewall Inn and the Monster.  If I'm going to a bar the Monster is where I tend to go because it's just down the street from where I live (I've been known to run there without a coat in the wintertime) and it's much more spacious compared to Julius , so I can walk around its two levels and not feel conspicuous if I'm there alone.  Despite not going there all that often, Julius has a friendlier vibe (including the bartenders) and the drinks are cheaper.  (Although it's famed for its burgers I've never had one.) 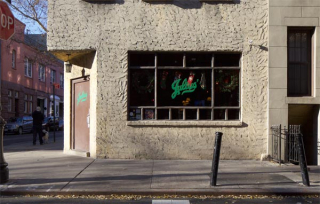 Finally, besides its role in this film, Julius appeared in another movie I've seen, 2014's  Love is Strange (starring John Lithgow and Alfred Molina as a gay couple).  But there was just one scene filmed there (pictured below).  Thinking back to all the gay-themed movies I've seen (more than 100) I can recall just one other that had a scene in gay bar in New York.  It was 1999's Trick, and the main characters have an encounter with Miss Coco Peru, who offers advice while powdering her nose in the bathroom at the club Twirl that used to be on W. 23rd St. 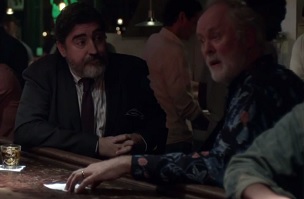 Julius was also a location for Boys in the Band and Next Stop, Greenwich Village.