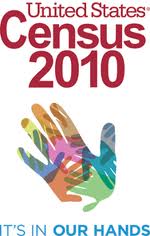 It's hard to believe my 13-week stint working as a Census enumerator has come to an end.  And I can't believe I actually went through with it - but I'm glad I did.  It was an enriching experience that was fascinating (yet at times frustrating) and exhilarating (but often exhausting).  After working for 30 years in the corporate world, insulated from the "unwashed masses" (i.e., the general public), the thought of interacting with them face to face wasn't something I relished.  But at the same time the researcher in me was curious about taking a peek behind the curtain to see how the Census sausage was made (and I was unemployed at the time).

As an enumerator my job was to collect Census information from households which hadn't returned their questionnaires.  75% of households nationwide return their Census forms but the rate of return in Manhattan is only around 55%. This might be due to unique circumstances such as vacant apartments and high-end co-op buildings which had a sizable number of units used as  "pied-a-terres" by their owners (a person is counted only at his/her primary residence). 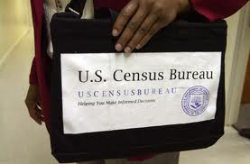 Neighborhoods were divided into sub-groups, each with 8-10 enumerators assigned to a four or five-block area.  Enumerators were usually assigned the neighborhood they lived in to make it convenient for us to go out at any time of the day.  My group was a mix of aging Village "bohemians", a photographer, actor, a few waiters and some of us with corporate pedigrees.  Those of us with corporate experience appeared to have an edge over the others when it came to completing the large volume of paperwork that was part of every aspect of the job - and required meticulous attention to detail.

Before we hit the pavement, a full week of training was conducted.   The seriousness of the job was impressed upon me the first afternoon when each one of us was fingerprinted.  We were also required to sign a confidentiality agreement that carried with it a stiff penalty for revealing any personal information collected during interviews.  Training materials seemed geared largely to suburban settings, so while we were instructed on how to go about surveying trailer parks and private homes, and received tips about safe driving, there wasn't a whole lot about how to approach apartment buildings in a large urban setting such as Manhattan.  Minimal guidance was offered on how to negotiate buzzer systems or cajoling doormen or building supers into letting us into a building. 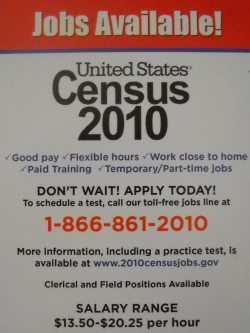 Although it was relatively easy to get people to cooperate when you were at their door, getting to the door proved quite a challenge.  When speaking on intercoms there was Manhattan's street noise to contend with and some buildings had poorly wired systems that made it nearly impossible to communicate clearly.  The biggest challenge, however, was being at the mercy of tenants.  Often they didn't reply when you announced yourself or they'd shut you off before you finished explaining the purpose of your visit.

I'd usually put in three to four hours of work each day (weekends too) but it felt like a full day, probably because I was always "on" during each visit as if it were a performance, a one-man show of sorts.  After I was finished for the day my adrenaline would be pumping, similar to how I felt after finishing a client presentation.  To get a completed Enumerator Questionnaire gave me such a rush.

If people refused to cooperate we had to be polite and diplomatic while getting the point across that "no" wasn't an option as compliance was mandated by law - as per the US Constitution.  (We were told during training that not cooperating was on par with refusing to pay federal income tax.)  Under no circumstances were we to call someone an "idiot", "pinhead" or "un-American" - no matter how much they may have deserved it.  Some respondents were very gracious (even contrite) while others were nasty, treating us like we were waiters or squeegee men.  However, I came to realize that how we were treated wasn't necessarily because we were Census workers (OK, sometimes it was) but simply because these people had nasty dispositions - or just had a bad day.  (By the way, that's me in the photo sporting my badge and official Census shoulder bag.) 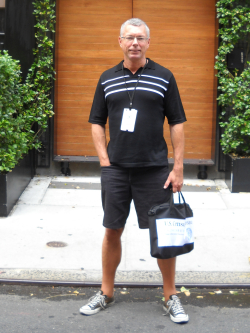 When enumerators got together we had a chance to share our experiences and the neighborhood Starbucks (and probably most throughout Manhattan) became Census Central since it was the most convenient and congenial place for us to have meetings with our crew leaders.

Despite the hurdles encountered I managed to complete about 250 interviews.  Upon finishing my stint a friend who works for a large marketing research company offered to pass my name on to the person who hires people to conduct door-to-door surveying.  I begged off because it was difficult enough getting people to cooperate for a survey mandated by law so I couldn't imagine what it would be like trying to convince people to do it just for the benefit of marketers.

My Census experience proved to be a largely rewarding one because it allowed me to take part in a vital civic task with a rich heritage.  Plus, it made me feel even more connected to my community.  And although there were frustrations the various challenges I encountered made getting a completed interview that much sweeter. (To learn more about how Census data is used by the federal government to help it run the country you may want to read the book Who Counts: The Politics of Census Taking.)