Although viewing choices in the primitive 1960's were limited to just three broadcast networks they produced an abundance of programs to choose from when reminiscing about favorites.  And what I remember best about some shows isn't necessarily individual episodes but, rather, peripheral aspects - which I've written about below. 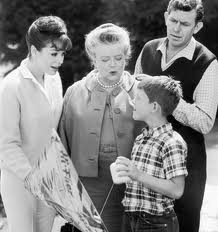 I'd be getting ready for bed when the Andy Griffith Show aired on Monday evenings.  Funny, but what I associate most with the show is a commercial for Maxwell House coffee that seemed to air every episode.  It showed coffee starting to perk in the little window atop the coffee pot and a catchy jingle derived from the sound of the rhythmic perking would begin to play.

The Pruitts of Southamption was a way-wacky, and short-lived, sitcom that aired on ABC during the 1966-67 season starring Phyllis Diller.  It's seared into my brain because of its surreal, so-bad-it's good opening.  Interestingly, 20 years later my friend Marina moved to Southampton and opened a bed and breakfast there that I'd visit regularly.

Petticoat Junction was a CBS sitcom that aired on Tuesday evenings, coming on just as my mother was leaving for her bowling league.  During the show's opening credits I was fascinated by the big water tank in which the three daughters were either swimming or bathing in.  I always wondered how deep the water was - and whether the girls were skinny dipping. 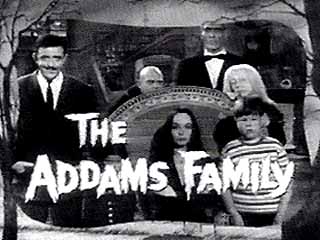 The Addams Family and Patty Duke Show aired on Friday nights on ABC and when they were over I'd take a drive with my parents into downtown Pittsburgh to drop-off a stack of weekly football contests at the Pittsburgh Press/Post-Gazette building.

Although I was only 7 or 8 I had a pre-conceived notion that Brooklyn wasn't a great place to live so I was intrigued that Patty Lane's family lived in Brooklyn Heights - which seemed like a very nice place.  Both shows had classic theme songs, and one of my all-time favorite lines is Patty Duke's - "A hot dog makes her lose control".  I don't know what it says about my family but we preferred The Addams Family over The Munsters.

The Mod Squad was another show with a great opening.  I was winded by the time Pete, Peggy and Link completed their run through that dark & dank tunnel.  Even 40+ years later the theme song doesn't seem dated - and it can be great for inspiring a sprint when you're on the treadmill! 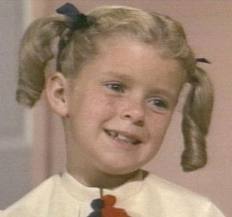 When thinking of the CBS sitcom Family Affair many think of Anissa Jones, the child actress who played Buffy and who died from a drug overdose as a teenager in the mid-70s, but I first think of the twinkling crystal chandelier from the opening credits.  And even though I was just 10 years old I was curious about the relationship between Uncle Bill and Mr. French (his "gentleman's gentleman"), especially when he'd draw his bath.

I was never a fan of the Beverly Hillbillies, Green Acres or Gilligan's Island - perhaps because they were a bit too zany or ironic for my prepubescent brain.  However, I did love the opening of Green Acres.  Intererstingly, when I'd occasionally catch a repeat of the show as an adult I appreciated Arnold the pig.  Another show I wasn't too keen on was the Brady Bunch.  However, I really got a kick out of the two movies from the 1990's that spoofed the show.

A long-forgotten show from the late 60's - Here Come the Brides - had a catchy easy-listening theme song which made it onto Billboard's top 40.  This one-hour show wasn't quite a Western or a sitcom although it had elements of both.  Set in the Pacific Northwest in the 1860's it told the story of a lumber mill owner who brought marriageable women from Massachusetts to serve as potential brides for the lumberjacks.  It introduced Bobby Sherman and David Soul before they became pop idols.  Also featured was 1930's actress Joan Blondell as Lottie, the owner of the local saloon who also watched over the girls (unbeknownst to benighted viewers she was probably a "madam".). 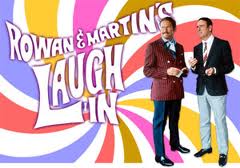 Finally, Rowan & Martin's Laugh-In was a jolt of electricity and watching it Monday night was a great way to start the week.  I loved the Farkles and all of Lily Tomlin's characters (e.g. Ernestine, Edith Ann, the Terribly Sophisticated Lady) and I got a kick impersonating some of the characters in front of schoolmates.  Besides the regular cast the show also featured a cavalcade of stars who'd make cameos throughout each show (e.g. John Wayne, Sammy Davis, Jr., Raquel Welch).  Its over-caffeinated pace was a pre-cursor to the MTV era.

If you'd like to read even more about TV you may want to consider two books: The 101 Greatest Sitcoms and The Complete Directory to Network & Cable Shows.